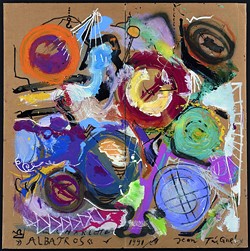 The beautiful clanking "Cascade," which occupies the lobby of the Carillon building, is the last major work completed by famed Swiss artist Jean Tinguely before his death in 1991. Always a provocateur, Tinguely made kinetic, absurd sculptures that are commentaries on our obsession with material goods.

The exhibition's curator, June Lambla, has more than a professional interest in this subject. In addition to being a magnificent assortment of lights, chains, scraps and mementos, "Cascade" is also an artifact of a set of rich relationships and experiences. Lambla was one of many whose lives were enriched by Tinguely's presence during the making and installation of "Cascade."

In the late '80s, when Andreas Bechtler and Hesta AG, his family's holding company, were developing the Carillon building, Bechtler approached Curators' Forum, the business in which Lambla was a partner with Jane Kessler and Michael Godfrey (who eventually became curator of the Bechtler, a position he held until his untimely death last year). He wanted them to create a groundbreaking exhibition program for the lobby to complement the permanent works that he had commissioned for the Carillon: "Cascade," Sol LeWitt's "Wall Drawing #683" and Jerry Peart's outdoor sculpture "The Garden."

The first exhibition, Counterbalance, not only introduced the work of Tinguely, LeWitt and Peart to an unsuspecting public, but it also introduced Lambla and the rest of Curators' Forum to the unpredictable Tinguely. Lambla tells stories of madcap negotiations, mercurial behavior and other crazy-making situations, but makes clear that one thing Tinguely left in his wake was the abiding affection felt by everyone who worked with him.

As Curators' Forum worked on the exhibition at the Carillon, Tinguely and his collaborator Seppi Imhoff worked there, too. This was part of Andreas Bechtler's larger vision of a space where the public would be exposed to the way artists think and work.

For Remembering Cascade, Lambla selected works from the Bechtler's collection that Tinguely created while making "Cascade" as well as treasured objects that didn't make it into the final sculpture.

Tinguely had to be persuaded to accept the "Cascade" commission and come to the U.S. His lack of interest in material culture, disdain for many art world practices, and his unease about being here resulted in the creation of numerous smaller works that are humorous but meaningful expressions of his impatience with conventional expectations.

"Tinguely was unimpressed with the value of art," relates Lambla. He worked with salvaged objects, packing materials and other stuff not designed to last. "Albatros," one of the works in Remembering Cascade, was painted on salvaged corrugated cardboard; after completing it, Tinguely scored it, folded it and used it to carry around other artwork.

The exhibition doesn't include documents per se, but there are notes and diagrams that, "because they are in Tinguely's hand ... slip very quickly into the realm of art," says Bechtler Museum CEO John Boyer. One of these is a long-lost diagram of "Cascade"'s motors, which was finally found when Lambla, museum registrar Shannon White and others were searching through the collection. A hunch led them to remove a note from its frame, and there was the diagram, taped to the back of the note. Separating the two would have damaged them, so for this exhibition, they have been reframed so that both are visible.

Tinguely's stature in the history of art is not to be underestimated. He was deeply influenced by Alexander Calder and was also associated with the dadaists, constructivists, suprematists and other movements that were active in Switzerland. Tinguely was part of the New Realists, which counted among its members his wife, Niki de Saint Phalle, Yves Klein and Daniel Spoerri. As Lambla states, "Even though he appears to be playful and flippant, he was very serious and well-rounded in his influences."