Cash on the barrelhead 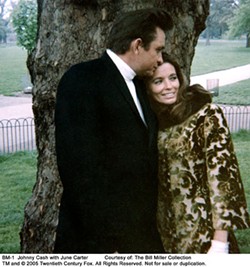 No matter how much you love his music, listening to Johnny Cash bang out his hits back to back is about as much fun as hitting yourself in the head with a hammer. Fortunately, record companies like Rhino, American Recordings and Cash's longtime label Columbia have been repackaging the Man in Black's works for easier listening nigh on 15 years.

On Cash: The Legend, (Columbia; 2.5 stars), the compilers have made long-term listening to the late icon's quivering monotone and loping, same-train-a-comin' backdrop bearable by arranging the retrospective of his works thematically into a four-CD box set. Not all of his music was dark and dreary -- the early-50s stuff can be downright frivolous, as evidenced by his warbling of the ba-doop-pa-doo chorus on "I Guess Things Happen That Way." The discs "Win, Place and Show: The Hits" and "Old Favorites and New" give you all the classic Cash from '56 to '94 that you can stand, but "The Great American Songbook" is just tedious. The "Family and Friends" disc is electrifying and magnificent, whether Cash is paired with Bob Dylan, backed by U2 or harmonizing with the Carter family. It ain't all legendary, but it's still a pretty good tale.

The June Carter set Keep On The Sunny Side: Her Life In Music (Sony; 3 stars) begins as a tougher listen. Despite coming from the finest harmonizing family in musical history, the best Carter could manage during the early part of her career in the 1950s was a high-pitched screech when she sang solo. It wasn't until the 60s, about halfway through the first disc, that Carter found her true voice, deeper and full of emotion. From that point on, the record is beautiful. If she hadn't been in Cash's shadow from the time of their marriage in '68, Carter's vocal and songwriting talents ("Ring of Fire") would have made her one of the biggest female country stars. "Song To John" sums up her total commitment to her husband: "I will always love you. . . until the end of time. . . and I will pray for you." The last cuts on the record, "Diamonds in the Rough" and a revisited version of the Carter Family hit "Keep On The Sunny Side," recorded just before her death in '03, will break your heart, chronicling the breakdown of Carter-Cash's voice, but not her spirit. This disc is the real treasure in the set.

Walk the Line is the forthcoming film tribute to Cash, starring Joaquin Phoenix as the Man in Black. During a recent interview with Rolling Stone, Phoenix had Cash's surly, moody thing down pat, walking out on one of the magazine's reporters who wanted to lob such gooey teenybopper questions as, "What would your fans be surprised to know about you?" Phoenix wanted to talk about how it took him four months to learn to play guitar and sing like Cash.

The movie's trailer opens on the exterior of a prison at night, doubtless invoking Cash's famed Live at Folsom Prison performance and his prisoner advocacy. Superimposed on the screen are some of Cash's credits: Rock and Roll Hall of Fame, Songwriters Hall of Fame, Country Music Hall of Fame. Cut to the film's version of Cash's Sun Records audition with demigod proprietor Sam Phillips telling Cash and his band to dig a bit deeper to impress him: "If you was hit by a truck and was laying out in that gutter dying and had a chance to sing one song that would let God know what you felt about your time here on earth, one song that really sums you up -- that's the kind of song that truly saves people."

Director James Mangold (Cop Land; Girl, Interrupted) made the film as a love story with music. According to advance reviews by the Hollywood Reporter and Film Journal International, Reese Witherspoon turns in an emotional performance as June Carter-Cash. One of the trailer's notable scenes has Cash saying to her, "Tell me you don't love me," as she gazes at him lying in a rumpled bed, sick and exhausted from a binge. "I don't love you," she dutifully replies. "Liar," Cash whispers.

"Hello, I'm Johnny Cash," Phoenix says in that familiar husky rasp, successfully channeling the Man in Black's spirit. No matter how strong or weak the film itself may be, there's not much anyone can do to hurt Cash's image -- or improve it. Cash was what he was, and he left the music behind to prove his uniqueness. Nobody -- no actor, no director -- can take that away. His ring of fire continues to burn.

Johnny's Cash: The Legend and June's Keep on the Sunny Side were released in August. Walk the Line opens in theaters nationwide Nov. 18. See Matt Brunson's film review next week.