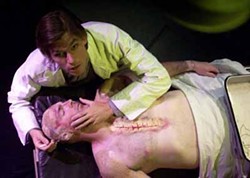 Toward midnight on Halloween, the late show at Carolina Actors Studio Theatre concluded with a stage appearance of an Abominable Snow Woman, a creature inspired by the GOP's horrifically unqualified vice presidential candidate. While Cirque de Morte is not scheduled for a reprise this weekend, and the governor of Alaska will likely return to her native tundra after Election Day, two other Abominable Snowmen will be laying over at Clement Avenue for CAST's early show.

In Neal Bell's adaptation of Mary Shelley's horror story, Monster: The True Story of Frankenstein, the intrepid scientist and his notorious creature are returned to their ultimate destinations, north of the Arctic Circle. That's where Shelley's narrator, Captain Walton, finds the dynamic duo, listens to the Doc's ghoulish biography, and brings the amazing tale back to mankind -- to be butchered and mutilated beyond recognition by Hollywood.

Onstage, it isn't Walton talking to us but the crazed "Modern Prometheus" recounting his ordeal to the Captain. Bell restores a good portion of the Creature's intellect (but not his narrative), and director Michael Simmons, doubling as makeup designer, contributes a makeover that all of us who have wearied of Herman Munster can bless him for.

With his ominous limp and his raspy voice, Lamar Wilson rehabs the customary robotic Creature about as much as the popular imagination will allow. No longer the zombie scourge upon humanity spawned by Hollywood, the Creature also recovers his original rationality. He is justifiably motivated to wreak vengeance upon Frankenstein because the scientist spurned his creation after bringing him to life. All of the Creature's reptilian venom and cold-bloodedness is aimed at Victor.

Sadly, much of the story's Byronic depth -- and the Creature's pathetic Elephant Man dimensions -- remain buried. With Victor telling the story and so much of the Creature's animus directed against him, we're left with a protagonist whose story leads toward madness. Very good. But for most of the evening, our protagonist is consumed by rage and excruciating suffering. Very tiresome. I found myself becoming more desensitized to -- and irritated by -- James Shafer's endless raging and roaring as Frankenstein. Can he keep pumping out all that volume through Nov. 16? Shafer's cerebral intensity and those few times a crazed gleam lit up his eyes were far more telling than his emotional tempests.

There are other pleasant reliefs along the way. John Xenakis and Cindy Kristenberg add some starch as Victor's parents, Sarah Provencal adds some spice as the Frankensteins' lascivious housemaid, and Jennifer Barnette adds some ethereal grace as Victor's fiancee. Bell adds some risque touches to the story line, one of them permitting Bob Glahn to bring a homoerotic flare to Victor's companion, Clerval.

Technically, the show offers few technical touches as formidable as the Creature's makeup job. Somebody needs to remind costume coordinator Beth Pilger, for instance, how cold it really is on the polar ice cap. But Simmons comes through handsomely in the lab, where the sparks really do fly as the mad scientist works on the Creature and his prospective bride. No breakfast cereal has ever boasted such snap, crackle and pop.