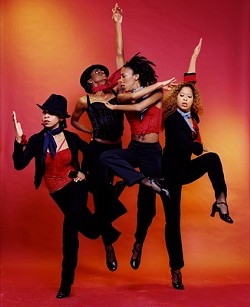 Payback is usually fair and just. On Friday night, I had the pleasure of watching over a thousand gentiles, gently prodded by a Jewish icon of Broadway and TV, dancing the hokey-pokey at Belk Theater -- to lyrics sung entirely in Yiddish.

Flash forward 24 hours to Booth Playhouse. As a prelude to the performance by the Chuck Davis African American Dance Ensemble with Alpha Omega Dance Company, my wife Sue and I were treated -- along with a sizable group of over-55s -- to a "well-deserved" homage to the Elders at the foot of the stage.

We were credited with tramping down the trails now traversed by our adoring descendents -- sort of a natural by-product of being heavier than grass, I would have thought -- and hailed by Baba Chuck as "Yado! Yado" (Elders! Elders!) amid other equally exotic snips of Swahili. Or Mandingo. Sue and I were as out of the loop as those hokey-pokeying goyim the night before.

Deserved or not, the ceremony was curiously moving in an age that worships youth and discards seniors as nonchalantly as last year's buzzwords. Nobody went too crazy with this wisdom and experience stuff on Saturday night: When it came time to strut out some dance, there was a welcome infusion of youth in the Davis ensemble.

But not to the exclusion of experience. Unlike the muscular swains and lithe maidens we often associate with professional dance, I noticed more than a token representation of men and women onstage who may have experienced fairly extensive stretches of parenthood.

In a celebration of the West African akonting, Baba Chuck passed this lute-like instrument to Stafford Berry Jr., a medicine man with a wizened, regal bearing. The women who danced the excerpt from "BlueGrass BrownEarth" sported an assortment of body types that would look as much at home in a Senagalese village as their eye-popping costumes.

I'd have to say that the instrument that should have been celebrated was the drum. The triumvirate of drummers who pounded so tirelessly, led by Kwabena Osei Appiagyei, seemed to call up the same dead elders whom Davis, in his vatic invocations, had asserted still lived among us. The reverberations that bounced back from the walls of the Booth really sounded like a crowd of people yelling enthusiastically.

If the Chuck Davis excerpt didn't quite return us to the New World -- or complete the evolution of African akonting to Appalachian banjo -- Alpha Omega certainly brought us back to America with superabundant energy. Tango Entre Tu Y Yo was a tangy, citified appetizer to be sure, with four fetching wenches splitting the female and male roles, but the highlights continued to be the supercharged ensemble pieces.

Through Wonder's Eyes, choreographed by Enrique Cruz DeJesus to a suite of five Stevie Wonder gems, lifted us to our first orgiastic peak, dropping us off at a 9:30 intermission fairly exhausted from just watching. Anyone familiar with the Wonder sizzlers framing the suite, "Keep on Running" and "As," will grasp how fiercely the Alpha Omegas were prodded to sustain the drum obsessions served up by the Davis Ensemble.

Pegao was no less infectious after intermission, adding a sensual dash of Latin spice to its Tito Puente mix. Choreography by DeJesus and Angel Garcia became particularly fevered during the classic "Oye Como Va." Not only was the sass of Tango wedded to the frenetic energy of Wonder, four strapping lads joined the four Tango teasers, matching their heat in a mesmerizing merengué scorcher.

Caroline Calouche has certainly taken a quantum leap in organizing the second annual Charlotte Dance Festival. None of the programs from the first week repeats this week, but one of the most exciting guest companies from last Thursday night's Dance Charlotte! will be hanging around for a second -- and third -- appearance this weekend.

At the last minute, alban elved dance company substituted "The Weight of a Grain of Sand" for their originally announced piece. But there was no diminution of quality -- if we take elved's previous collaborations with the defunct Moving Poets as our barometer. Paired with Shawn Worthington, elved founder Karola Lüttringhaus delivered her customary éclat, even doing some of the lifts in this compelling pas de deux.

Likewise, Nkosinathi Mncube's sampler of Still feel the presence, the most haunting solo I've experienced in recent memory. If the Graham piece has epic dimensions, Mncube's descent into the sufferings of a man who has lost a loved one is no less intense. Images of his long arms and long dreds -- all atremble -- aren't soon forgotten. Alongside Barbosa's new company, Mncube's Ebony Core Dance Theatre is also based in Columbia.

From Arlington, Va., Jane Franklin Dance offered the richest ensemble piece, performing the three parts of Ring barefoot in peach-colored peasant garb with an intriguing bamboo sphere -- interspersed with hoops -- as they evoked the Vietnamese countryside. A much-needed comedy interlude was provided by Calouche & Company, giving the classic Kate-Petruchio confrontation a dash of contemporary flavoring as Tai Dorn and L-Jae Levine danced flirtatiously to Vivaldi in The Taming of the Shrew. Or was that Ginny Skinner-Haynes paired with Levine? I suspect Calouche insinuated another last-minute change in the program.

Lüttringhaus and Worthington will be teaming up again as alban elved contributes two airborne choreographies to this Friday's Aerial Dance Concert. I'm most curious about their "Escape from Planet Blackwater," but I wouldn't advise missing Half Me, Twice You, the concert opener.

On an earthier plane, Mandy Patinkin was the purveyor of yiddishe voodoo I alluded to earlier. His goofball travelogue through American popular song -- with an excursion to Les Miz -- stopped at a few other unexpected Yiddish oases along the way. These included Yiddish versions "Take Me Out to the Ballgame," "God Bless America" and "Supercalifragilisticexpialidocious." Not too far out of the baseline, since the last two songs were actually penned by Jews.

I was a little embarrassed, to tell the truth, by the Jolsonesque "Rockabye Your Baby With a Dixie Melody." The star of Criminal Minds was predictably on firmer ground in the realm of Sondheim, where he gleaned "Hyphenated Harriet," "Being Alive" and "Children Will Listen."

Perhaps the best thing about the Patinkin concert was the way it came to Charlotte -- loosey-goosey and unapologetically ethnic. Hey, we're grown-ups here.