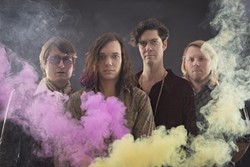 I first saw Chappo open for Of Montreal in NoDa a few years back. At that time, the band was hitting radio with its hit pop single, “Come Home.” Since then, the band has slipped a bit off the radar, but that’s not to say they aren’t continuing to produce catchy, off-kilter rock songs that warrant a second listen. The band is touring in support of its new album, Former Future Self, released on May 12. (Jeff Hahne)