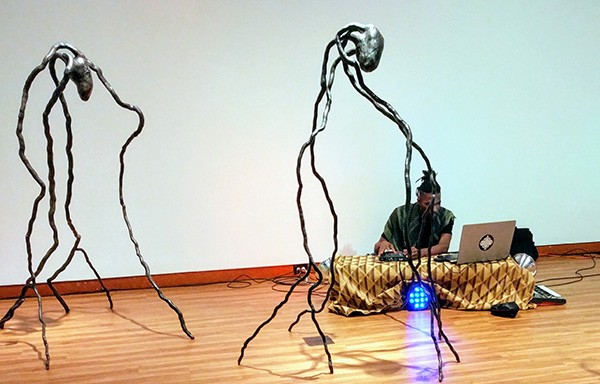 "Suppose a being came from another world, and he played an instrument that we've never heard," Chris McWayne says. "Would we know that it was music?"

For McWayne, also known as rapper Maf Maddix and galactic soundscape designer Brother Aten, this otherworldly query is much more than a thought experiment. It's a jumping-off point for the next stage in his career.

For the past 16 years — eight of them in Charlotte — McWayne has been pushing the boundaries and warping the definition of sound as art. As Maf Maddix he's threaded his philosophical soothsayer flow through three albums plus a single dedicated to soul-jazz poet Gil Scott Heron. As one-half of hip hop duo N'DangR Species, McWayne's rhymes balanced street-smart grit with vulnerable introspection. His Brother Aten project, featured last month at Gantt After Dark's Synaesthesia exhibit, summons the swirling sounds of dark matter and bursts of radiation from the galaxy's edge.

This fall, McWayne's quest to develop his art takes him to England. He's been accepted at the University of Arts in London, where he'll pursue a master's degree in sound arts. A new country and new academic discipline represents a leap of faith for McWayne, but it's not his first.

Growing up in Baltimore, Md., McWayne discovered early on that he was different from his peers. "We lived in the inner city, the hood and projects," the 31-year old rapper and musician recalls. "There weren't many kids doing the things I liked to do. I played soccer and no one did that. Skateboarding — no one did that either."

Then he found diversion in a big book of knowledge he discovered at his mother's house, in particular a section on languages and cultures from around the world. An early aptitude for music was encouraged. McWayne was a soloist with the Baltimore County Chorus throughout grade school, and he learned to play guitar, piano, trumpet and trombone.

Then in high school, McWayne started rhyming freestyle with friends. Rhythm and language became a passion for him.

"I listened to lyrics that I thought were amazing over and over again," he says. "I wrote them down, and broke down the sentence structure and different parts of (speech) until I understood what made them so good. Then I (wrote) verses that hit all of those marks."

McWayne's Music interests carried into college. At East Carolina University, he met Luse Kanze, his future partner in N'DangR Species, at a flag football game. McWayne also started creating his own beats, most of which he sold to other nascent rappers.

He transferred to the University of North Carolina at Greensboro to pursue a PhD in Anthropology, but a heart-to-heart with his professor and mentor, Dr. Shelly Brown-Jeffy, changed the course of McWayne's life.

"She had me write a list of things that made me want to wake up in the morning," McWayne remembers. "I realized that none of those things on the list required a PhD in Anthropology, and that I should try to do what makes me happy."

McWayne started devoting more time to his music, and in 2005 he moved to Charlotte. He started making music as Maf Maddix. Under that moniker, he formed N'DangR Species with Luse Kanze. At the time, McWayne recalls, rap was in a rut from trying to copy hip-hop's 1990s golden age. N'DangR Species' "progressive yet raw hip hop" deliberately went against the grain.

"We were into artists like Flying Lotus," McWayne says. "We used those kinds of beats, but kept the rhymes like Mobb Deep old school."

"My first Maf Maddix album is called Tektite Illah: The Known Unknown." Tektite Illah is a character created by McWayne and Charlotte artist Marcus Kiser for a graphic novel. In the storyline, Tektite Illah kills his brother Aten. Thus, in 2008, Brother Aten, McWayne's dark electronic music side project was born.

"(Brother Aten) draws a bit from Egyptian and Sumerian mythology," but it's also futuristic, McWayne says, adding that he takes issue with term Afrofuturism. "Afrofuturism is just a word for something that already exists. It's like the word 'trees.' Trees exist whether they're called trees or not."

Since launching Brother Aten, McWayne has continued to expand his artistic web, collaborating with other creators on projects like Nouveau Sud, a cross-cultural, inter-disciplinary collective drawn from Charlotte's dance, acrobatic and theatrical scenes. He did sound design for Matt Cosper's XOXO theater troupe's Bohemian Grove, and is currently doing sound design and acting in XOXO's #CAKE.

Eventually, McWayne hit a point where his ever-expanding reach exceeded his grasp. He wanted to create a multi-genre art project called Black Gods, but realized he needed to learn more about lighting, set design, costume design, and directing in order to do his vision justice.

"I definitely know that I can't do everything that I want to do," he says. "The only way I'm going to do that is through the experience of learning."

So he planned a move.

In retrospect, the pathways of McWayne's life have led him to London, he says, and a relatively new area in academia: sound art. But what is sound art and what does it mean for the future of art — the way it's made and the way it's experienced?

"Art is nature," McWayne answers, adding that the problems our species have with nature are reflected in the strictures we place on art.

"Our once-limited ability to understand (nature) caused us to put confined boxes on things that are expansive," he says. "Now we're at a place where we're deconstructing (those) boxes because our minds can comprehend more than our previous definition allowed. Socially we do that by deconstructing boxes like gender, race and sexuality — because those boxes no longer work for us. The same thing is happening with art."

Even though he has to cross an ocean to find it — and he's set up a GoFundMe to help him get there — McWayne feels fortunate that he discovered this relatively recent discipline that represents a deconstruction of academic boxes. Sound art is a natural and logical fit for him.

"I first fell in love with music because it inspired me while I was creating visual art," McWayne says. "I'd listen to soundtracks while I was drawing. Visuals and sound have always been one to me."

"When I write, I conjure visuals in my head," he continues. "Then I describe them. When I create beats or produce music, I know that I want the sound that makes me see something."