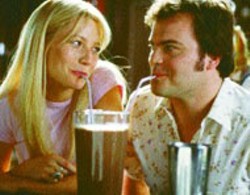 The city of Charlotte has had its fair share of dalliances with the big screen, the low point being the 1990 Tom Cruise stinker Days of Thunder, in which the words "Charlotte, North Carolina" were transposed over a dilapidated barn from which emerged a man drinking out of a Mason jar. World-class, indeed.

The 1994 Jodie Foster vehicle Nell at least let the world know the Queen City had the benefit of modern trappings like running water and paved roads, but even here the town itself looked shoddy and run down.

So let's give the Farrelly Brothers full credit for presenting Charlotte in a pleasing light in Shallow Hal, which, aside from a few interior shoots, was filmed almost entirely in our hometown. Under the sympathetic eye of Oscar-winning cinematographer Russell Carpenter (Titanic), the Charlotte skyline is presented repeatedly throughout, looking lovely as it twinkles against both daytime and nocturnal skies. Freedom Park pops up at various points during the saga, and local establishments like the Double Door Inn, Fuel Pizza and Capital Grill get their respective moments in the spotlight. And then there's all the local talent that worked on this film, both in front of and behind the camera (among these, local actor Daniel Greene, who's appeared in past Farrelly films, turns up in the prologue as a kindly doctor).

Of course, moviegoers from Los Angeles to Lansing won't give a damn about where the movie was shot or set (in fact, the story takes place in an unidentified city, not Charlotte per se); they'll only be interested in whether the thing's any good. The answer, perhaps unexpectedly, is yes. Shallow Hal is a winning romantic comedy that marches to its own eccentric beat. The unfortunate preview, which makes the enterprise look like 120 minutes worth of fat jokes, couldn't be more misleading; truth be told, practically all of the fat jokes have been crammed into that trailer, allowing for the rest of the movie to make its case as a sympathetic tale about getting past surface appearances.

I don't mean to give the impression that viewers should amble in expecting the all-inclusive humanity of a Frank Capra feature -- this is, after all, the Farrellys, who featured Woody Harrelson "milking" a bull with his mouth (think about it) in Kingpin and Jim Carrey "milking" a new mom with his mouth (think about that, too) in Me, Myself & Irene. Shallow Hal has its PG-13 share of raunchy gags and morally dubious asides, but as was the case with There's Something About Mary, there's a tender love story at the center of all the sophomoric shenanigans.

Jack Black (High Fidelity) plays the title role, a nerd who's spent his life trying to date gorgeous women clearly out of his league. Hal's only interested in physical beauty, but a chance encounter with self-help guru Tony Robbins (playing himself) changes all that. "De-hypnotized" by Robbins to ignore what movies and magazines tell us about ideal beauty, Hal can now only see people as they truly are on the inside -- suddenly, models look like shriveled hags and homely people (both men and women) appear gorgeous.

Hal's best friend, the equally shallow Mauricio (Jason Alexander), can't understand his pal's new taste in women, and he's completely knocked out when Hal starts dating Rosemary Shanahan (Gwyneth Paltrow). A large woman with a large heart, Rosemary knows she has no shot at love and is thus flabbergasted (and a bit suspicious) when Hal starts wooing her. Hal, of course, sees a svelte beauty (Paltrow au naturel); everyone else sees the 300-pound reality (Paltrow in a convincing fat suit). "Doesn't she take the cake?" beams Hal. "She takes the whole bakery," retorts Mauricio.

The burgeoning relationship between Hal and Rosemary (which hits a major speedbump late in the film) is one of the driving forces of the tale, but no more so than the unexpected maturation of Hal as a human being. Black's performance in this tricky role is a delight, retaining his character's goofball persona while also showing us the blossoming adult underneath. And Paltrow's contribution is also key: While she only dons the fat suit during the second half, she immediately nails Rosemary's cautious, fearful traits, making it easy for us to absorb her character's pain.

There have been conflicting reports on whether the Farrellys were satisfied with their Charlotte experience (the press material makes no mention of the location shooting, which is unusual), but we hope other filmmakers like what they see on the screen enough to bring their business to town. After all, beauty, as it's been noted, rests squarely in the eye of the beholder.