For Charlotte's Modern Primitives, it's success ... or bust 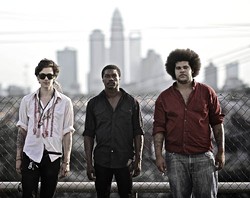 The Modern Primitives know how to play their instruments. The group knows how to write punchy and powerful songs and they also know how to hustle. If they don't succeed, it won't be for lack of trying.

The band has only existed for nine months, yet already they have become known as one of the city's premiere bands, their name showing up on bills in some of the better venues across Charlotte. Better yet, they just signed a deal with independent record label Electric Mountain and they're wrapping up recording on their debut EP, set to come out in about a month.

"I don't have a day job," explains guitarist and singer Travis Phillips, "so this has to work." He takes a drag off his cigarette, held between tattooed fingers. He got the ink to permanently take himself out of the running for a fallback corporate job.

The band has just left the stage at the annual Plaza Midwood Pig Pickin', where they were noticeably the youngest and least established act. That didn't stop Phillips from commandeering a Fox News cameraman and convincing him they were the real story. It worked. Those who tuned into the 10 o'clock news that night were treated to a feature almost entirely about Modern Primitives.

While they're not shy about doing what it takes to garner the attention required to make a go of it in the always competitive music industry, it's obvious they're doing it out of a genuine love for music and a belief in what they're producing.

"I just finally found people I really want to play with, people who have the same musical references as me," says Phillips of bassist Darien Steege and drummer Phillip Gripper.

Gripper and Phillips met while at a skate competition in Columbia, S.C. They played Violent Femmes songs at an after-party with Phillips on acoustic guitar and Gripper on a djembe. They didn't realize they both lived in Charlotte until much later, deciding to form a band some three years after that initial meeting. They added Steege to the lineup and began practicing at a tattoo shop in Belmont where Phillips was working at the time.

Those practices would become the band's first shows, as the owner began advertising live music on Wednesday nights.

"That was kind of weird," Gripper says, "trying to learn a song when a bunch of people are sitting there watching you. And you've got to remember that this is Belmont, so it's not normal people."

Steege and Gripper object upon hearing this, both hailing from the small town. "You guys are exceptions," Gripper explains.

Steege and Gripper act as great foils to Phillips, both musically and stage presence-wise. Steege mostly stands still, rocking back and forth a bit, his right hand a blur while he hammers away at his strings with a pick, all down strokes. Gripper, often shirtless, showing off his muscular build and his many tattoos, provides a hard, steady beat. Meanwhile Phillips takes the flamboyant role, usually heavily festooned with necklaces and a feather hanging from his left ear. He has a kind of easy Southern charm that shows through in his stage presence.

He's also willing to take chances, like when he recently took to the stage at Snug Harbor in a found woman's pea coat, and nothing else. Well, there was the oversized sombrero he was already wearing. He felt that the hat was ridiculous enough that stripping down and donning the coat seemed beside the point.

Meanwhile, Gripper acts as the band's manager and speaks deliberately but thoughtfully, almost like a businessman, which is what he is in a way. Steege is the quiet one. He mostly sits and laughs at Phillips' tangents, which come fast and furious.

Phillips recounts taking a test some years back to see if he had attention deficit disorder when he got to a question asking, "Does it feel like your brain is a television with 800 different channels on all at the same time?" He was shocked at the accuracy of that statement.

Perhaps it should come as no surprise then that, despite having their hands full with Modern Primitives, the band is already talking about a possible side project, a gospel band with all the same members plus a few new ones.

It's hard enough to make it work with one band, but after witnessing what they've been able to achieve in less than a year with Modern Primitives, I'm not about to bet against them.

With Dirtbag Love Affair and The Chalkies. $5. Aug. 5. 9 p.m. The Chop Shop. www.chopshopnoda.com