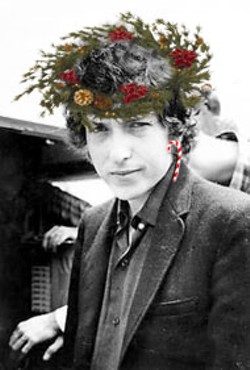 "A little more to the left."

"No. It's fuller around to the right."

"Somebody's liable to get electrocuted."

"I swear you've got the best side to the wall."

"I thought we'd be through by now."

"Oh, God. I've already gone and tied it to the wall sconce."

It was a few days before Christmas 1968, and my family had gathered. The living room was filled with the intense, clean, resinous smell of the tree. Once we had it hoisted into place, we set about the bristly business of decorating. I was 20, and my mind was full of music. Withdrawing to the sofa, I thought: Bob Dylan wouldn't be caught dead doing this.

"Let's not have the angel this year."

I decided to make a pilgrimage to Woodstock, New York, to see Dylan. It didn't slow me down a bit that I had little to tell the man except that I was inspired by his songwriting. To shake Dylan's hand, that would be Christmas enough.

The next afternoon, with no more than 50 dollars, I set out. I was catching a ride north with two friends from UNC, paying my share of all the 26 cents per gallon gas we'd burn, and coming back south by thumb. Fifty dollars would be plenty.

This was really my second pilgrimage to Dylan and Woodstock. The first I had undertaken several weeks before, during Thanksgiving, and had abandoned outside of East Stroudsburg, Pennsylvania. I got cold and lost my nerve on a little-traveled high-ridge country road there, and I turned back. On the way home I caught a ride with a black schoolteacher, who carried me all the way down 81 through the Shenandoah Valley night. We drank a beer together the last hour before he let me out, and agreed that things might be getting better between the races, or at least we hoped they were.

Then a trucker hauled me from Hillsville down the Blue Ridge mountains. When we stopped at a Mt. Airy diner and I didn't order anything, he thought I was broke and made me let him buy me a cup of coffee and a chance on a punchboard. Back in the semi, he gave me some liquor, which I drank from a six-ounce hillbilly souvenir jug he'd stashed under the seat. He let me off at 52 and 40 in Winston-Salem about four in the morning.

Immediately, a hunter with an enormous buck strapped to the top of his Impala picked me up. A couple minutes later he said: "Look, I hope this don't bother you none but I got to hear some music." He popped an eight-track of Johnny Horton's Greatest Hits into the tape player, and the car was full of the songs I'd learned to sing by: "Battle of New Orleans" and "Sink The Bismarck!" and "North To Alaska." The teacher and the trucker and the Horton-loving hunter made me think better of the pilgrimage business. I forgot the Stroudsburg cold and knew I'd try again.

It was several weeks later, the evening of December 10, when we piled into my friend's "65 Rambler and went roaring up the three-laned US 1, which is these days a ghost road just south of the Petersburg Turnpike. On and on, all night, the first of many deep and dreamless long-haul trips up and down the Eastern Seaboard. I was astounded at the size and magnificence of the great bridge at Wilmington, aghast at the dazzling lunar landscape, gas flares and chemical air of north Jersey. One of my more worldly companions gazed upon the scene and remarked with a combination of pride and disgust: "America flexing her muscles!"From the George Washington Bridge we looked out over the vast glare of Manhattan. In less than a year it would be my home, but that night it made me feel thoroughly out of place, for a few moments sorry I had even come. Soon it was past, and we were in the dark Connecticut country, and it was snowing lightly. I recovered my spirits; after all, I was on a mission.

They were driving me toward Storrs, Connecticut, to see the Hickey family, late of Chapel Hill, and coincidentally to perform a flanking maneuver -- to approach Woodstock from the north and east. The plan had been to leave me in New Haven where the big roads fork, but at the last minute my compatriots, who were bound for Boston, found it in themselves to veer off to the north and take me right into Storrs.