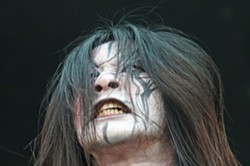 Willie Heath Neal Traditionalist country crooner Neal lives the honky tonk life. So do myriad other singers, but Neal's sandpaper vocals and twangy acoustic guitar, along with his writing, have extra rough edges that reflect a life lived hard. But hey, isn't that what real country music is all about? After honing his chops in a punk outfit in the early days, Neal has been full-on country for the past few years. Hick'ry Hawkins and American Gun will also perform. Milestone (Shukla)

Anais Mitchell Stark, literate coffeehouse folk that isn't afraid to quote Eliot, Orwell, Prince and (Gram) Parsons, Anais Mitchell isn't always easy listening (her voice is an acquired taste), but it is a relatively rewarding one, provided you're looking for ... well, stark, literate coffeehouse folk. She released an excellent third album, The Brightness on Ani DiFranco's Righteous Babe label this past February. Excellent, that is, if you like stark, literate ... you get the picture. With Paul Curreri. Evening Muse (Davis)

John Digweed With or without compatriot Sasha, DJ legend Digweed made his name/cut his teeth on a mix of IDM and progressive trance and house. The man's as much a trail blazer as Clyde Drexler; Digweed's latest obsessions have a nasty, Beirut-like habit of blowing up clubs a few months later. Along with his (musical) partner Nick Muir, Digweed's latest work has been released more and more under the alias Bedrock, with the records put out on a label of the same name. Whatever incarnation he's rocking, he's worth every penny. With Focus. The Forum (Davis)

Chthonic Taiwanese death metal band's name is derived from Greek classical mythology meaning spirits of the underworld. These noise mongers dress the part, make-up and tons of black and spew an ungodly blast of orchestral dirges added to the steamroller guitars and throat-tearing vocals. With Written In Blood, Merzah. Tremont Music Hall (Shukla)

The Moaners Chapel Hill's feminine answer to blues-punk-indie-rock like Kings of Leon and the Black Keys, the duo of Melissa Swingle (guitar, vocals, harmonica, saw) and Laura King (drums, guitar) suggest testosterone might not be as important in that particular blend of styles as we've all been led to believe. Their sophomore effort, this year's Blackwing Yalobusha, trades in some of their arch indie-tude for a more straight-up homage to the music's blues roots, and it's a welcome change. With locals Raised By Wolves. Evening Muse (Schacht)

Shafaatullah Khan Multi-instrumentalists are rare in Hindustani (North Indian classical) music. Shafaatullah Khan is not only sitar master but is also proficient playing surbahar (a sitar-like instrument) and tabla. His family's musical heritage and lineage goes back eight generations. This young Khan must hold the torch mighty high to continue his legendary father and brother's legacies. This he does with minimal effort. Khan recently released a series of CDs, The Rhythms of Nature, where he performed on the sitar and surbahar and accompanied himself on the tabla. Belk Theater (Shukla)

Volatile Baby Did you miss Wildwood Flowers during its recent run? You'll get another chance to hear some of the old Carter family songs, plus new music from the Charlotte trio at this gig. They're even planning on playing some redone Doubting Thomas songs. The all-star lineup for the show will have Chris English (The Wake) on bass, Greg Lilley of The Amy Broome Band on drums, guitarist Mike Jones of Big Al and The Hardsoul Poets, Irwin "Virgil" Bostian of Doubting Thomas and David Childers on guitar and mandolin, in addition to the ladies from Baby. Special appearances by Pamela Bob (she played June Carter in the musical) and David Childers are also planned. Visulite Theatre (Hahne)

People The NYC duo of Mary Halvorson (guitar, vocals) and Kevin Shea (drums, vocals) incorporate free music concepts into the rock idiom, emphasizing the front of the avant-pop hyphen. Shea surrounds Halvorson's angular guitar shapes and Cocorosie-esque vocals in a maelstrom of skins-and-cymbals, but the fluid time sigs still leave room for melody to play a vital role in the equation. Touring behind their new release, Misbegotten Man, this is music with little middle ground; you're either giddily on board or hopelessly lost at sea. With the promising local outfit Black Congo, N.C. -- imagine an Extra Golden/Animal Collective mash-up -- as well as Alexis Gideon, and The Fishnet Stalkers. Milestone (Schacht)