John Grooms vs. a jerk from Operation Save America 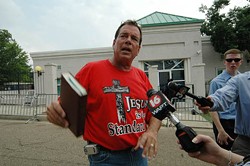 Passion is double-edged. It leads us to act nobly in pursuit of positive, uplifting goals; and it can make us act like idiots. I've known these things for a long time, but man, did I ever get a new lesson in it last week. I heard that St. Peter's Catholic would have a celebratory mass for the lesbian, gay, bisexual and transgender community, and its friends and supporters. It's an annual service sponsored by the Charlotte diocese's Ministry for Gay and Lesbian Catholics, started by, among others, the late Rev. Gene McCreesh of St. Peter's. I have a passion for social justice, including gay rights, and for the beauty of Catholic rites and rituals, so I went to the mass last Wednesday.

My family and I arrived Uptown with a few minutes to spare. As we approached the entrance, I noticed a tallish man standing on the sidewalk with a sign; at first I thought he was collecting money for a charity. I quickly realized, though, that he was a protester, or as I thought at the time, "one of those Operation Save America (OSA) goons" who march and scream in protest of varied LGBT events. His big sign was crammed with Bible verses, and he was holding a Bible and wearing a T-shirt that condemned gays, abortion, and other things on his list of stuff to hate.

As people streamed into the church, the man raised his voice and shouted at them, rattling off scripture verses. My family went on as I slowed down, keeping an eye on the guy. As he continued shouting at would-be worshippers, shocked disbelief spread through me. Here was a church that openly welcomes and supports people who, even in these supposedly more open-minded times, still have to take crap from bigots and yahoos. And now this clown has the misplaced passion, and pinch-souled audacity, to condemn them — and in front of their place of worship? God almighty, my own passion told me, somebody has to tell off this jerk. I mean, my thoughts ran, "The gall of that son of a bitch!"

As I walked directly toward the man (who looked a lot like OSA leader Flip Benham, although I wasn't able to contact the group before deadline to double-check), he examined me with an accusatory look, and started in on a new Bible verse. I met his gaze, and my voice rose to match his volume: "You know what? You need to shut up and get out of here."

I got a defiant look, and then another verse.

"I'm serious, pal — you should get the hell out of here, right now."

He yelled, "Thank you for the persecution! You're helping me get a step closer to heaven," and launched into the same verse again.

"You miserable idiot ..." I stepped in closer.

Red-faced and sweating, he then yelled at the top of his lungs, "Get away, you something-or-other (I didn't quite catch it) of Hell!" I thought, "Wow, this guy is seriously nuts," so I determined to tone things down; instead, what came out was, "You fucking lunatic! How dare you show up at a church and yell your hateful horseshit at people? Where do you get the nerve ..."

"It's what they worship that's sinful," he yelled back at me. By then, we were both at full volume.

"Well who the fuck are you? You think you know these people's hearts?"

"I know that they're entering a place that preaches heresy!"

I looked at the bigot, astonished. So he's not just anti-gay, he's anti-Catholic, too? Passion slopped over into rage: "You've gotta be one rotten son of a bitch to do what you're doing," which was met with more about how I was sent by, or part of, Satan — I'm still not clear on that point. By now, my temper was through the roof.

"You pompous idiot," I yelled, pointing my finger at the guy, "somebody ought to beat the crap out of you every time you pull this kind of shit ..."

"Thank you for the persecution!" he yelled again.

At that point, a friend from St. Peter's came out of the front door, called my name, and said, "Mass is about to start." I chugged up the steps, still shouting back at the protester, "Damned hillbilly jackass ..." and then entered the vestibule. I took a deep breath, entered the church proper, felt the cool air conditioning, looked at the filled pews, took in the ancient residual odor of incense, stood next to the collection of priests who were at the back of the church, ready to walk up the aisle to co-celebrate the special mass. And I felt like a jerk. I had flown off the handle over something that would have been more wisely ignored — and while on the way into a mass, for God's sake.

I dipped fingertips into holy water, crossed myself, walked to a pew, and sat down, shaken, and thinking of an old quote by singer-songwriter Tom Lehrer: "If a person can't communicate, the very least he can do is to shut up."

The mass was nearly half over by the time I regained my composure and didn't feel so much like an idiot. When we all walked out after mass, the protester was gone. I went downstairs to a reception, where I told a friend — a lifelong Catholic and social activist — about my confrontation with the shouting bigot. "Once I got into church, I felt like a real jerk."

My friend smiled, put his hand on my arm, and said, "I understand completely, but look at it this way: at least you weren't the one who was yelling at people going into a church." Somehow, it didn't make me feel better.

Editor's Note: A big congratulation goes out to John Grooms for snagging a Third Place win for his Boomer With Attitude column in the 2011 AltWeekly Awards — which are bestowed by the Association of Alternative Weeklies. This latest win marks three total awards — both state and national — that Grooms has garnered this year. We're proud to have him on our team.

Ministry for Gay and Lesbian Catholics