Anyone entering the job market knows this story all too well. A downward economy, spawned by one of the worst recessions in modern American history, has forced college graduates to settle for less than they and their expensive degrees are worth. 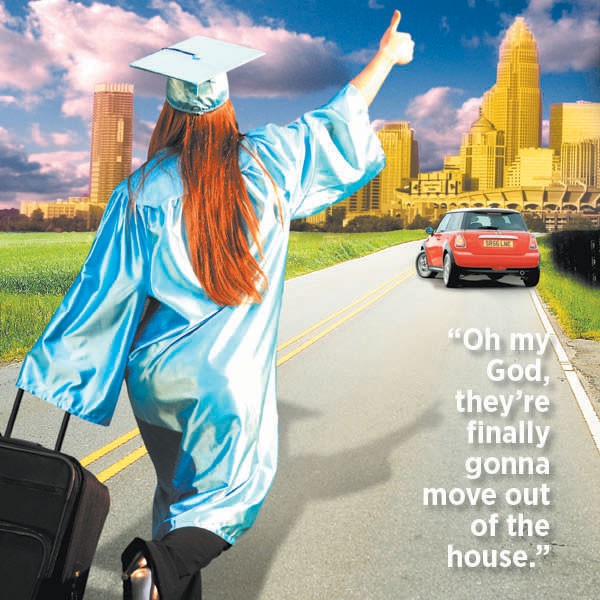 But economists in Charlotte agree this year will look a little different — maybe even a little better.

The metro's unemployment rate has fallen in the 12 months since March 2011, the most recent data available, from 10.8 percent to 9.4 percent, and the Queen City is adding more jobs than any other city in the region. Those figures are a far cry from pre-recession unemployment rates, which hovered around 2 percent and 4 percent in the '90s and early 2000s, but they're better than they were at the height of the recession in 2009 and '10. In those years, unemployment was above 12 percent.

"Overall, we're seeing there's definitely a jump in hiring for college graduates, though it is not back to levels prior to recession," said Denise Dwight Smith, director of UNC Charlotte's Career Center. At the school's annual April job fair, twice the number of employers showed up than last year. Dwight Smith said in recent years, 86 percent to 94 percent of UNCC grads have found jobs or gone on to graduate school within six months of getting their diplomas. The best industries for jobs are computer science, engineering and accounting, Dwight Smith said.

Brian Mister didn't attend the job fair and won't have a diploma in any of those industries when he graduates in July from UNCC. He found his job at NoDa Brewing Co. by using less than 140 characters. 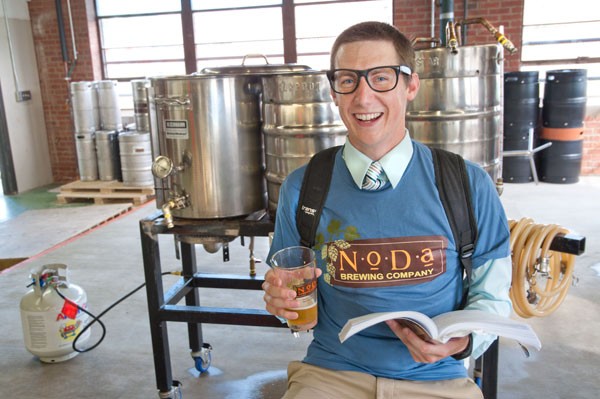 "I was on Facebook like any other high school student, [but] I wasn't really on Twitter," he said. "I wasn't really sure how to use it, until Queens University got beer on campus for first time, and I tweeted about it.

The brewery tweeted him back.

"I realized I could talk to businesses, so I got really into it, really fast," Mister said. "I just started using it to network and look for jobs."

Co-owner Suzie Ford was so impressed by his gumption, she created a position for him.

"Social media has become more and more important because three-quarters of the job market is still hidden. The jobs aren't publicized," Dwight Smith said. "Networking is a big deal."

Another way graduates can land jobs is through internships.

"It helps them with developing skills, can crystallize a career choice, and more and more employers are actually looking at interns to see if they can convert them to hires," Dwight Smith said.

The personal interaction employers have with interns is an invaluable — and inexpensive — recruiting tool.

"[Employers] are able to see the person perform, can evaluate performance, and know students are a good fit," she said.

But some recent graduates don't have the luxury of taking unpaid summer internships. They have bills to pay.

IN 2010, outstanding student loan debt surpassed total credit card debt. That figure was set to exceed $1 trillion this year in the U.S.

When Julie Howard was earning her business degree, she thought she was doing the right thing. The 35-year-old attended York Technical College in 2002 while working full-time to pay for her books and classes. In 2010, she furthered her education and career prospects when she earned a bachelor's in business administration from Wingate University. Since she was ineligible for financial aid, she paid for her degree with student loans.

Right out of college, Howard nabbed an accounting contractor position. But six months later, she was back to pounding the pavement, unable to find a new job that matched her skill set and education. And she still had student loans to pay.

"You're made to feel obligated to get a degree because no one will hire you if you don't have a bachelor's degree," she said. "But it's so expensive."

Today, a college degree may be worth less than the cost to earn it. New graduates are drowning in student loan debt, which is made worse by rising tuition rates and decreasing public funding and grants for universities. They end up moving in with their parents, many of whom can't afford to house them.

The Student Loan Forgiveness Act of 2012, which Democratic Rep. Hansen Clarke of Michigan presented to the House of Representatives on March 8, attempts to alleviate this financial pressure while stimulating the economy. To be eligible, borrowers must prove that they cannot repay their loans in time. The legislation would cap interest rates on subsidized federal student loans at 3.4 percent — the popular federal Stafford loan's rate is set to double to 6.8 percent in July if Congress doesn't intervene — allowing the money borrowers set aside for loans to go toward goods and services.

The Forgiveness Act would help both graduates and students with its 10/10 Loan Repayment Plan. Current borrowers who plan to set aside 10 percent of their income for discretionary purposes, such as loans, for more than 10 years will have their remaining debt forgiven, and borrowers who have made student loan payments for more than 10 years may be immediately eligible for debt forgiveness. First-time borrowers would be forgiven up to $45,520 — the average cost of a university degree — after paying 10 percent over 10 years. Though the bill has been praised for its pragmatism, political polarization in Congress may overshadow it. Senate Republicans recently blocked a different Democratic measure to maintain student-loan rates because of the potential for higher taxes.

While the bill is still being reviewed in committee, no moss is growing under Howard's feet. She used her accounting savvy and experience to start a business with her husband.

MISTER AND HIS GIRLFRIEND Amanda Wright, sat outside of NoDa Brewing and munched on hot dogs and hamburgers as they discussed the anxiety they've felt in the months leading up to graduation. Wright will leave Queens University in May with a communications degree. While there, she was a scholarship athlete, worked on campus and interned at Discovery Place in Uptown. She realized through her internship that she wants a career in public relations, but, unlike Mister, hasn't put much thought into a post-graduation job.

"For the first time, I'm not going to be doing anything that's been so set in stone," Wright said. "I realized playing a sport, doing work study on campus, my internship, along with all the school work, I haven't had a lot of time to start looking for a job."

That she plans to stay in the Charlotte area already gives her an advantage.

Progress in North Carolina's economy has been disappointing, according to an economic report from Wells Fargo. The state struggled to add jobs, with nonfarm employment rising a lowly 0.5 percent in 2011, while the unemployment rate edged up 0.1 percent. But a recent uptick in economic development, population growth in the state's urban areas and more economic diversity, meaning more industries moving into Charlotte, are enough to make the Queen City a desirable place for graduates to plant roots.

"I wouldn't get discouraged," Silvia said. "The job market is the best since the recession hit, and if you've got the talent and the grades, you're going to get a job."

HOW TO MANAGE YOUR POST-GRADUATION LIFE

1. Stay in touch with your loan lender. Call them as often as you want with questions, and notify them of any changes in your life, such as a new address. Communication will prevent defaulting and allow you to get to know the intricacies of your debt so you can better pay it off.

2. Google yourself. If you don't like what you see, potential employers probably won't either.

3. Employers are inundated with applicants, so it's not hard for them to forget you exist. Follow up with a second, or even third, email, and if you're really interested, call. They'll get to know your gumption before you even walk in the door.

4. It might be 40 years away, but don't make the mistake of forgetting about retirement. Look into starting a Roth IRA, a generally untaxed retirement plan.

5. Live with a roommate and spend about 1/3 or less of your post-tax income on rent.

6. The average college graduate begins his or her post-college days more than $2,000 in credit card debt, so avoid them, and if you absolutely want one, educate yourself on the payment dates and interest rates of whichever you choose.

7. Eating out can add up. Find some basic, cheap and tasty meals you can make during the week, and treat yourself only once or twice a month. Your savings account (start one, like, now) will thank you.

8. Invest in a comfortable, professional outfit you can wear to interviews. You can find great deals during seasonal sales on basic blazers and pants.

9. Depression is common among post-graduates, so don't forget to take care of yourself. Eat right and look into a YMCA membership. Even just walking outside for 30 minutes is enough to boost your energy and mood.

10. Do yourself a favor and find a mentor. Sage wisdom is invaluable.