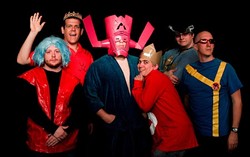 When: Fri., Jan. 27, 8:30 p.m. 2012
Price: $7 for individual show; dinner packages available
Mon Frere (French for "my brother"), the Greensboro-based comedy troupe who filled The Mill (now Roux at Boudreaux's) last year during its Harry Potter-inspired sketch shows Hufflepuffed is back — but this time without the brooms and snide comments about Dumbledore. Instead, the troupe has magically maneuvered new material into its act, which is also slated to feature Thunderstood, a one-man multimedia comedy by founding member AJ Schraeder. The show is raising money for travel expenses for Schraeder, who was chosen to attend the San Francisco Sketchfest. Sean Keenan's foul-mouther Talking Baby opens. For more information, visit www.monfrerecomedy.com.
— Anita Overcash