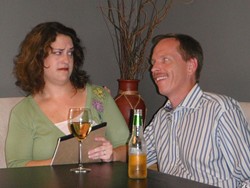 When: July 29-30, 8 & 10:15 p.m. 2011
Price: $13
Little is known of The Dysfunctional Figurines, except that it's a brand-spankin' - new Charlotte-based sketch comedy troupe. Formed by Tom Olson, a former resident of L.A., the group's inaugural show titled "Etch-A-Sketch" will take to the stage of CAST on July 29 and 30. They say it's inappropriate for young audiences due to adult language and content - but if you ask us, that makes it all the more appealing. For more about the troupe, visit www.dysfunctionalfigurines.com.
— Anita Overcash