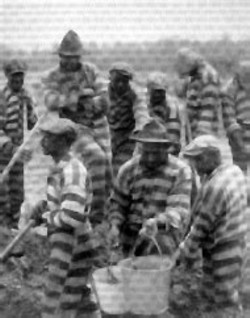 If you tumbled into this city and asked yourself, "Where am I?" the Levine Museum of the New South would be an excellent place to begin finding an answer. Following a 17-month renovation, the Museum of the New South has reopened its doors, continuing Charlotte's penchant for continually reinventing herself. The museum first and foremost documents the difficult, turbulent, painful and exhilarating changes in the Piedmont since the Civil War. The museum's permanent exhibit is Cotton Fields to Skyscrapers: Charlotte and the Carolina Piedmont in the New South. It's billed in the press kit as "a multi-sensory, multimedia, interactive experience telling the stories of people who have shaped the New South since the Civil War."

And it's all that. The show includes a recreated cotton field, a walk through Main Street, clothes you can try on from the 30s, a lunch counter from the segregated 60s, skyscrapers and a miniature textile factory. It's a fun history lesson, a look at those local things which have affected all who call this region home. I left the main exhibit with the uneasy feeling that everything changed while I wasn't looking. The years have vaporized the street in my wake. This show is the vapor made flesh.

The New South is made more personally tangible in the upstairs exhibits. Pottery, quilts and 70-year-old photographs. New? This isn't the New South; this is pieces of the Old South surviving the random and wrenching transition called progress. Or damnation, depending on who you're talking to.

Two of the three shows here are about survival. In Catawba Pottery, Legacy of Survival, we see the pottery tradition of the Catawba Nation of North Carolina which survived the encroachment of English settlers, smallpox, warfare, treaties, and attempts by the federal government to "mainstream" Indians into society. Crossroads Quilters is an exhibit showcasing a loose confederation of mostly African-American women from Mississippi who individually and collectively continue the heritage of traditional quilting, and help insure that quiltmaking is continued by teaching children their art.

The third show upstairs, Light Days, Dark Nights: The Carolina Photographs of Doris Ulmann, offers a piece of Carolina history with portraits of Americans in the rural South. The portraits were taken between 1929 and 1933 and are among the first visual documents of life during the early years of the Great Depression, though putting dates on these images is a little misleading. The photographs documenting the stone sober faces and ethereal rural rituals convey a spirit of human struggle, frailty, and sorrow which just can't fairly be pegged to a single time and place. It's a piece of the human condition, trapped here for a time, but ultimately timeless, and at home everywhere.

Half of Ulmann's photographs are accompanied by writings by her friend Julia Peterkin, who lived at Lang Syne Plantation, Peterkin's family cotton and asparagus farm near Fort Motte, SC. Peterkin wrote short stories and novels in the 20s and 30s, often using the lives of the plantation workers as subject matter. H.L. Mencken plucked her from the "southern wasteland" to publish one of her stories in his literary quarterly, The Smart Set. Peterkin's novel Scarlet Sister Mary won the Pulitzer Prize for fiction in 1929, the year Wolfe's Look Homeward Angel and Faulkner's The Sound and the Fury were published.

Ulmann and Peterkin roamed the South between 1929 and 1933 in a chauffeured limousine. Doris searched subjects for her camera. Both reportedly loved the freedom of the open road. In 1933, they collaborated on a book, Roll, Jordan, Roll, recounting their journeys and documenting southern hard times in the process.

The text and the photographs work together well. Peterkin's words are elliptical and indirectly descriptive, Ulmann's photographs moody, mythical and haunting, but not cloying or corny. "Footwashing, Mt. Pleasant Baptist Church, near Ft. Motte, SC" documents a Christian ritual witnessed in her travels. The photographer's traveling buddy writer narrates: "The women quietly take off their hats, replace them with simple flowing headdresses of white cotton cloth, and put on white footwashing robes over their dresses... The brothers sit quietly and look on while each sister kneels and washes the feet of a sister friend, wipes them with the towel, and sits down for the friend to wash hers. The same water is used until it gets too dirty, then the deacons empty the basins and refill them from the barrel. When all the sisters' feet are washed, the basins and towels are handed over to the brothers, who wash each other's feet."

The photo is soft focus without the blurry romantic overtones: It looks both posed and not posed, too divinely arranged to be simply captured by the camera, too genuine to be a set up. Many of Ulmann's images -- a fisherman standing with his throw net, prisoners in a road gang, plantation workers bundling asparagus -- look staged to my jaded eye. The evidence says otherwise. Who's going to get a chain gang to pose?

I think it's more likely Ulmann was one of those select picture takers who could elicit trust enough from her subjects to allow them to forget she was there, or to feel intimate enough to not care.

Crossroads Quilters: Stitching the Community Together was created by Mississippi Cultural Crossroads for the Southern Arts Federation and curated by David Crosby.

Some of the quilts in this show are done by kids learning the craft from masters. Included in the exhibit are quilts by Hystercine Rankin, Mary Ann Norton, Geraldine Nash and Gustina Atlas -- all named master folk artists by the Mississippi Arts Commission. Rankin is also recognized as a National Heritage Fellow by the National Endowment for the Arts. Someone is paying attention to this quiet artform.

All the quilts here are quality, even to my craft blunt eye, but the kid's stuff is most fun. Much of it is unapologetically autobiographical. When kids are artists, they don't bother to hide simple selfish joy. It's all about ME!

"Me and My Neighborhood" by Heidi Lynn, Geraldine Nash, CQ and YPCEP show four children floating in the corners of the black fabric quilt. In the middle are six boxes (small TV sized) with images of buildings -- a pyramid supermarket, a fort backed by rainbow mountains, a church with a smiling sun perched on the gabled facade.

The patchwork children are bossy, reverent, sassy and joyful. They float groundlessly in the void and I haven't a clue what it all means. Perhaps that's the only joy in seeing it. That's enough.

The Catawba Nation has been making their distinctive pottery for more than 4,000 years. That may be the only thing that hasn't changed much since settlers started visiting this area about 500 years ago.

On large black display boards through the Dickson Gallery are descriptions of the techniques and history of the processes, from digging the clay on the banks of the river to slow firing the pottery in handmade ovens. Also, in large copper print on black board, there's a description of the hardships suffered by the Catawba Nation at the hands of uninvited guests.

The Nation was decimated by smallpox and warfare. Treaties moved them around and reduced landholdings. Treaties were promised, never ratified. In 1840, 144,000 acres were confiscated by the state of South Carolina. Two years later, the state bought the tribe 630 acres on the Catawba River. That's what the Catawba Indian Nation calls home today.

The tradition of pottery seems to have survived intact. For the last 200 years, pottery sales have provided sorely needed income, but the greater importance probably lies in the continuation of a cultural tradition which has survived centuries of tumult.

The unglazed pottery has a presence. All browns and blacks and reds, a hundred modifications in those colors; all the pieces are utilitarian, but not to a fault. The object's utility is crucial, but the beauty is the first thing you notice.

Seven master potters are here. Many of the same objects are made by the different potters -- wedding jugs, peace pipes, arrowhead pipes, pitchers, vases. Each artist makes the object his own, through modification of size, shape, and surface treatment. The symmetry of the objects is achieved without the potter's wheel, and the painstaking efforts at unassisted symmetry results in an unmistakably handmade, one of a kind object.

Poster size photographs of the artists accompany the work. This is a treat. They all look as genuine as the work, some as weathered. Georgia Harris (b 1905, Lancaster Co., d 1997) looks as old as the clay she digs from the riverbank. Her work is the finest here; I know that because hers most invites touch. Her symmetries appear faultless, though I know they can't be. She used the flexible lid from a Spam can as a finishing tool.

The work has been a refuge for many beleaguered Catawba Indians for many years, providing a place to both hide and shine.