In search of fresh faces

To enter a room filled with people that, upon first glance, look as though they have nothing in common with you is not something you ever get used to.

No matter how well a person from a minority group learns to assimilate and code switch to better relate with and maneuver within the majority group's culture, being the token melanated individual at work or in a place of leisure never becomes comfortable. You learn coping strategies that work best for you when you find yourself in white spaces.

Black and brown beer drinkers in Charlotte are currently in a state of coping with Charlotte's craft beer and brewery culture, some reluctantly dipping their toes into it while most ignore it altogether.

According to the statistics, it is not just a Charlotte issue. A 2016 study commissioned by the Brewers Association found that the fastest growing demographic of craft beer drinkers are the mixed-race population, the Latino population right on their heels, with African-American and Asian enthusiasts trailing behind.

However, when you look at the breakdown of the Charlotte racial demographic according to the most recent U.S. Census Bureau, the African-American and Latino demographics make up a significant portion of Charlotte's overall population. Yet still, when you step into craft beer breweries around the Crown Town one would be hard pressed to find people of color reflected in the brewery patron population.

There are no Jim Crow-style "White Only" signs posted up in Charlotte breweries. And there are not many instances of blatant racially-charged discriminatory acts toward non-white brewery patrons from owners, staffers or fellow customers. However, the uncomfortable nature of being black in a predominately white space during a time of leisure and relaxation does not have much appeal.

If I, as a black Charlottean, have to put on a cultural code-switching mask of "acceptable blackness" in white spaces during my entire workweek or during multiple client meetings, spending my free time in a predominately white space is not the first hangout spot that comes to mind.

I am more likely looking to spend my leisure time relaxing in comfortable black or multiracial spaces; looking to be amongst friends where I can be my true self within my authentic black cultural identity. I am looking for leisure-time spaces where I do not have to worry about making others around me feel comfortable and unthreatened by my blackness.

The resulting preconceived notion is that going to a Charlotte brewery will require the taxing mental work of putting on my "socially acceptable blackness" mask during a time I have set aside to just relax and be me.

So what can Charlotte's current brewery owners and regular patrons do to help change these preconceived cultural notions attached to Charlotte's brewery culture? How can they help both budding and long-time black beer enthusiasts see breweries as a space of true leisure and relaxation for all? 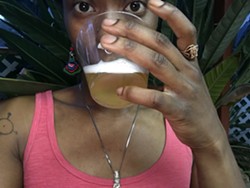 There are many answers and even more questions that come to mind when trying to respond to such questions, but Lenny Boy Brewing Company and Unknown Brewing Company have tapped into one answer for both — hip-hop.

Charlotte hip-hop culture has the potential to help many black Charlotteans relax their preconceived notions of Charlotte's brewery culture. Through event programming efforts and speciality packaging, Lenny Boy and Unknown are tapping into the connective nature of hip-hop.

Last Saturday, Lenny Boy Brewery put on the Dat Hip Hop Fest, billed as an all-out hip-hop event complete with live music, an OG Swag Sale, breakdancing, live street art and food trucks. During my time there, between 4 and 7 p.m., I only had the experience of the live music and food trucks. The only vendors I saw selling swag was a U.S.O. table inside the taproom.

Townes Mozer, 29, owner and founder of Lenny Boy Brewing Co., has a frat-boy charm typical of the brewery patron you'd expect to find at his establishment. He took some time to chat with Creative Loafing and described how beers like Bring The Ruckus, Burn Down For What, Sexual Seduction and Dat Pale were all inspired by hip-hop songs or the culture as a whole.

"A lot of us [at Lenny Boy] just like hip-hop music," Mozer said.

Later, I ran into the Carney family, who came with their two toddlers specifically for Dat Hip Hop Fest. Ashley Carney said she was always looking for free family-friendly events that include music and beer. "If it has those three elements, then we are always there. Since, my husband is a hip-hop junkie and my son loves to breakdance and I saw this event on the calendar I knew it would be a good fit for us," she said.

For her African-American husband Justin Carney, 29, the hip-hop vibes were lackluster. "The hip-hop element got me interested. Now that I am here I don't feel it is hip-hop enough. Not even a little bit, but I don't know what happened before or what is going to happen after we leave," he said.

Ashley said her son was looking forward to seeing the breakdancers, but they didn't show up by the time the Carney family was off to continue their Saturday family outing Uptown.

Dat Hip Hop Fest will not be Lenny Boy's last such event, Mozer said. "We just opened this facility this past September, so we are just getting our footing here. We have not done many hip-hop events yet. But, this past New Year's was our first hip-hop-themed event with a DJ and it was lit. It was a little bit more diverse that night. Which was great, you know. And everyone was having a ball."

Mozer said the plan is for Lenny Boy to host hip-hop themed events every six months at the brewery.

"Our crowd is really diverse because we have so many things on the board," Mozer said. "We have non-alcoholic kombucha, we got regular brews, we got sour brews, we got gluten-free beers, so in essence we are kinda like hip-hop, we are not trying to do everything, but everything embodies us."

Scotty Kent, 29, marketing lead for Unknown, opened the door of the tap room with smile and a warm handshake introducing himself. His backwards white cap, Charlotte Hornets graphic tee with the teal logo, and teal sneakers reflected Kent's love for homegrown Charlotte culture. Kent is one-half of the "Bring Back the Buzz" grassroots campaign duo that organized Charlotte's voice to get the Charlotte Hornets' name back.

Kent's marketing savvy, love for local Charlotte culture, and deep hip-hop roots are reflected in how Unknown is approaching the issue of bringing diversity into its taproom and shifting the mindset of those who assume Charlotte brewery culture is not for them.

"With us, we want to try to find ways to reach different people in Charlotte. People that would not typically walk into our taproom. People who would not find themselves in South End. People who do not live on this side of town. We want to give them reason to show up here."

Kent explained, "One thing that I have really tried to focus on since I have become the marketing person here is making Unknown as much as part of the fabric of Charlotte as possible. Since I am a massive hip-hop fan as well, the chance to showcase local talent, especially when it is good local talent, is important to try to push since we have the platform."

Local hip hop act Phaze Gawd approached Unknown with a concept called Bars, Bands & Brews. The first two events were a success, and for Kent, the idea to continue holding them was a no-brainer.

For Kent, opening up to hip-hop is about using the culture as a tool to bring all types of people together.

"Not a lot of things are able to bring a lot of people together. I would like to think that beer can do that," he said.

With Charlotte's craft beer culture, hip-hop may be one of the tools a few breweries like Lenny Boy and Unknown turn to showcase to African-Americans in Charlotte that the brewery is truly a place for you, but this cannot be the only remedy from just a few breweries to make the scene as inclusive as it has the potential to be.

If Charlotte really wants to foster true diversity, helping to foster diversity in one of the city's most popular and well-loved leisure sectors is essential. The groups of people we feel most comfortable hanging with during our leisure time is a reflection of their tolerance. How diverse is your circle of friends? Why not grab a beer at a Charlotte brewery and diversify your social circle?