Cycling gets easier in a handful of Charlotte neighborhoods

Pumping up the local economy, one rack at a time 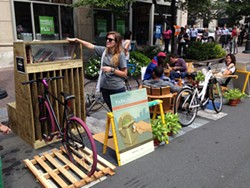 We all know bike riding across the city is a healthier mode of transportation. Not only is it better for the environment and offers quiet travel, but it also decreases the kind of traffic snarls that make rush hour maddening. A lesser-known benefit to bike riding, though, is that it pumps up the local economy.

Bart Stetler, owner of Queen City Bicycles in the South End, can attest to that. When Stetler noted a number of his customers came to his shop — not surprisingly — by bike, he approached a member of his riding group, who also happened to be the bicycle coordinator for Charlotte Department of Transportation. He asked if he could get the parking space in front of his shop fitted for a bike rack. He learned the county was already looking for a pilot space to do just that. Now, what was once a single metered parking space that could house one or two customers is an oasis of inverted U racks that can hold 10 bikes.

"The bike corral definitely gets a lot of use, especially on weekends," Stetler says. "[Getting the rack] made so much sense. We can fit as many customers on bikes in the one space as the rest of the street can with cars."

More bike racks like these are coming to a community near you. A simple metal rack holding five to 10 bikes may not sound like news, but the effects could improve the future of transportation in Charlotte.

Shannon Binns, executive director of Sustain Charlotte, is the force behind getting more permanent bike racks installed across Charlotte, the first of which are going up between Thanksgiving and Christmas.

"We're putting racks in several neighborhoods, such as Enderly Park, Wilmore and Plaza Midwood," he says.

Pure Pizza, for example, plans to install a bike rack — or more accurately, a bike tree — when it opens its second location in Plaza Midwood next year. The vertical, free-standing structure allows multiple bikes to be hung while taking up minimal space. It will have both form and function as public art and convenient, secure bike parking. When Sustain Charlotte approached the owners of Pure Pizza, they were so pleased to know the rack was already planned that Sustain Charlotte decided to partner and supply a Little Free Library next to the tree.

The installation of a bike rack is a good business move. Studies have shown that an increase in biking and alternative transportation options can boost local retail sales by 10 to 25 percent.

Sustain Charlotte hopes other neighborhoods see the value and agree to the racks. In 2012, the organization launched a partnership with the city's Neighborhood and Business Services department to educate neighborhood associations across the city on creating a set of sustainability goals. This year, with a grant from the Knight Foundation, Sustain reached out to the associations that identified transportation as an issue and asked if they wanted bike racks. Some did, some didn't.

"Starmount was very interested," Binns says, "but they're such a residential neighborhood, they don't really have a destination spot to locate the rack. So we're looking at parks, adjacent neighborhoods. They have to locate it where they think is best. There's all these unique challenges to something as simple as figuring out where to put a bike rack."

By encouraging more people to use bikes, cycling becomes safer for everyone. Drivers become more aware of nontraditional vehicles, more cognizant of hand signals, and cyclists find safety and visibility in numbers.

Binns, who lives in the Chantilly area, bikes almost every day to meetings with city officials, other nonprofit leaders and business partners. But Chantilly doesn't have a bike lane-marked road. So when his schedule takes him Uptown, Binns uses share roads (marked with a bicycle to indicate motorists should "share the lane") through Elizabeth's residential, low-volume streets.

The city is improving, with the adoption of Complete Streets and other policies that create a safe, comfortable transportation network for pedestrians, bicyclists and transit passengers of all ages and abilities, as well as motor vehicles.

"We're more aware of these things now, but Charlotte spent decades making it a point to move cars through the city as quickly as possible," Binns says. "Build in extra time to get where you're going so you can look out for pedestrians and cyclists. If you speed through an intersection, you're not really thinking about other users of the road."

In an interview with QCity Metro, Dianna Ward, head of Charlotte's B-cycle bike sharing system, had this to say: "There is something wonderful about being outdoors ... Looking up at at the sky, looking around, meeting people, seeing things that nobody else gets to see. You can't do that from a car."