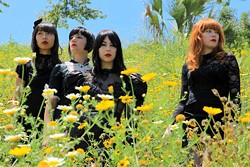 A few years ago, Kristin Gundred was the singer/drummer in the band Grand Ole Party. San Diego Magazine called them one of the 50 People to Watch in 2008 and many expected the band to break into the mainstream any day. But in 2009, breakup rumors led to canceled gigs and the eventual end of the band.

Instead of being the end for Gundred, it actually sparked a new beginning. She sequestered herself in an effort to learn guitar and do what she really wanted to do — front a rock 'n' roll band. Taking on the monicker of Dee Dee, she released a few 7" albums before getting signed to Sub Pop as Dum Dum Girls.

Dee Dee got her first guitar at age 12 and took music classes in high school and college, but was always frustrated in her attempts at learning how to play. She played the violin and piano before finding a natural ability behind the drums. While she was able to sing and perform as the drummer in Grand Ole Party, it wasn't her goal.

"I was a much better drummer, but it's very different," Dee Dee says. "There's no way to feel like it's your band if you're the drummer. I love the guitar and I love playing the guitar now and the ease of which I can write songs on that instrument is irreplaceable. At a certain point, when I signed to Sub Pop and had the opportunities that go along with something that huge, I thought, 'This is my chance. This is how you start doing what you want to do.' If you want to sing in a rock 'n' roll band, you might want to form a rock 'n' roll band."

She gathered up some friends and has hit the road as Dum Dum Girls, a quartet that balances pop-rock with hints of punk. Dee Dee remains the driving force behind the band as its primary songwriter, but that doesn't mean she won't trust the other girls to put their stamp on the music.

The band released its debut album, I Will Be, in March of 2010. The lo-fi sound is attributed to the fact Dee Dee recorded the songs in her living room on basic equipment. She says it's a capture of what Dum Dum Girls was at the time. The band's new EP, He Gets Me High, has a full-band sound and is closer to what you would hear at the live show.

The band hopes to release its second full-length album this fall. They're adjusting to life as a headliner — going from performing 25-minute sets to including more songs and having better fluidity between them.

As for Dee Dee, she's still learning how to be a front woman — learning more on the guitar and getting over stage fright.

"I purposely play very light guitar, short scales — for beginners," she says with a laugh. "I need to feel comfortable and confident in what I'm doing. I always strive to improve, too. I can finally play bar chords now. That's my big development of the last couple months."

She's also come a long way from the first Dum Dum Girls show where she only sang, after being too scared to play guitar.

"The first time I played a show with a guitar was mortifying," Dee Dee says. "I broke a string and it was like molasses trying to fix it. Over time. I've become more comfortable with it and I really get excited about playing with this band. We feed off each other's energy and it's a really positive, intense experience."