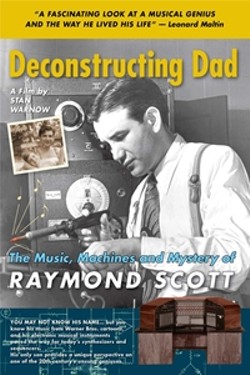 Deconstructing Dad: The Music, Machines and Mystery of Raymond Scott

A documentary exploration of the life and work of American maverick composer, inventor, futurist and electronic music pioneer Raymond Scott (1908-1994), presented from the unique perspective of his filmmaker son. Filled with Scott's utterly original music, which ranges from jazz to classical to electronica to Warner Bros cartoon scores, this personal film tells the fascinating story of this native New Yorker's incredible journey through the 20th century. Known as "the man who made cartoons swing," Raymond Scott is a forgotten music icon, and this year marks the 75th anniversary of his music.

Deconstructing Dad: The Music, Machines and Mystery of Raymond Scott is not showing in any theaters in the area.