Ahead of third album, band tours for love of music, not money 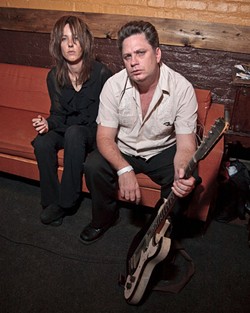 Two weeks ago, Charlyn Marie Marshall (aka Cat Power) brought her smoky coo to Carrboro, N.C. Looking for something to spice up the night's solo performance, she rang Dexter Romweber, a reliably feral foil for her tamer talents. Romweber made his name with The Flat Duo Jets — their torrid rockabilly made ample use of the singer's dark and dangerous warble.

His current pursuits afford him softer moments, but onstage, he still breathes fire. And so Romweber went to a nearby rock club to help out his friend and frequent collaborator. But the night's most memorable moment happened before he sang a note, while he and a buddy waited for grub at a nearby pizza joint.

"These young girls come in, and they're maybe 19," he recalls. "They're with their mothers, and they're going to see Cat Power. My friend goes to order the pizza, and later on in the night he tells me, 'Dex, all those girls went in there, and they said, 'Is that Dexter Romweber sitting over there?'' These are girls that I wouldn't have dreamed in a million years would know who I am. My name goes further than I think it does."

The idea of this 47-year-old rocker nibbling pizza with a steely stare while being fawned over by a bunch of giggling teenagers is admittedly pretty funny, but it's also indicative of his current situation. The Dex Romweber Duo — featuring his sister, Sara Romweber, on drums — debuted four years ago with Ruins of Berlin, a slick collection that featured contributions from a few indie rock stars, Cat Power and Neko Case among them. The Duo, which will perform at Snug Harbor on Nov. 29, has also been talked up frequently by Jack White, who released both a single and a live album from the group on his Third Man Records imprint, a tribute to Dex Romweber's impact on the similarly bare-bones White Stripes.

The Duo's second LP, 2011's darker and meaner Is That You in the Blue?, extended this momentum, but Dex is still scrapping in the rock 'n' roll shadows. He plays frequently in and around his Triangle homebase, often hitting cramped dives like Chapel Hill's aptly named Cavern Tavern.

"Frankly, it's a very frustrating business," Romweber admits. "To others, it might not be. But I wrestle with a lot of the same issues that I did when I was young and got into it. Finance is very up and down. The road life is difficult. You find that you're not really in control of your own fate. Your fate lies with booking agencies and management and other bands that might want to have you on the bill."

The duo format helps the Romwebers clear these financial hurdles. After all, touring with just two people, a few guitars and a drum kit is far cheaper than employing a full band. And the stripped-down environment gives Romweber an opportunity to exercise his more savage strengths — vicious guitar solos, that bruised and burly bark. But he's quick to emphasize this is not his ideal medium.

"Absolutely nothing about it intrigues me," he complains. "I like music with bigger instruments and larger horns and keyboards. If I could afford to do it live, I would. The duo is... a way to get it done economically. It wasn't something that I necessarily chose or thought was a particularly great formula."

His records allow Romweber to achieve these big ideas. On Is That You in the Blue?, the Duo's tenacity is enhanced with extra instruments. The serpentine instrumental "Gurdjieff Girl" sees Dex's taut guitar tangle with a corkscrewing saxophone.

The band's next album, recorded this summer and fall and likely to be released in February, will include horns, bass, organ and even some saw. As evidenced by the New Romans, Romweber's currently inactive big band, he has the knack and hunger for larger arrangements. This new effort should carry the Duo closer to that mark.

Back home after his recent Cat Power performance, Romweber can't help revisiting the frustrating nature of his trade. But his love for rock 'n' roll is too great to let it go.

"I'm flabbergasted by the unknowableness of a life like this, the unsureness of it," he says. "There's a lot of hassles, but it's all I really know how to do. And it's very exciting. In certain ways, it continues to astound me how ridiculous it is, but in terms of what the songs can be and what they are, I still find that pretty cool."