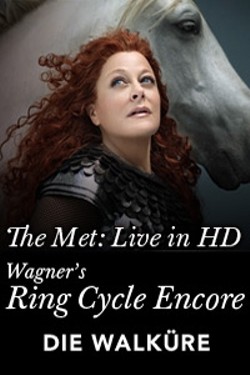 An encore performance of Wagner's Die Walküre will be shown in select theatres on Monday, May 14, 2012, at 6:30 PM in all time zones. This extraordinarily powerful work of theater focuses on some of the Ring's most interesting characters at decisive moments of their lives: Wotan, whose violation of his own laws has jeopardized the gods' rule; his twin offspring, Siegmund and Sieglinde, who are meant to save the gods; and, above all, his heroic Valkyrie daughter Brünnhilde, who makes a fateful decision that shatters her world. This production marked soprano Deborah Voigt's first performances as Brünnhilde. Bryn Terfel again is Wotan, Jonas Kaufmann and Eva-Maria Westbroek star as the twins, Siegmund and Sieglinde, and Stephanie Blythe sings Fricka.

Die Walküre: Met Opera Ring Cycle Encore is not showing in any theaters in the area.