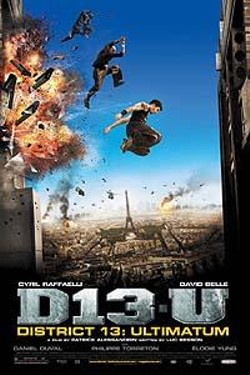 Two years have passed since elite police officer Damien Tomasso teamed up with reformed vigilante Leito to save the notorious District 13. The state of the district has deteriorated, and a group of corrupt cops and elected officials are conspiring to cause civil unrest in D13, looking for an excuse to raze the area and cash in on its redevelopment. Now Damian and Leito must join forces again, and use their mastery of martial arts and their unique physical skills to bring peace to the neighborhood by any means necessary before a proposed nuclear air-strike wipes it off the map. With fights and death defying leaps, this adrenaline charged sequel takes the groundbreaking parkour action from: "District 13" to thrilling new heights.

District 13: Ultimatum (Banlieue 13 - Ultimatum) is not showing in any theaters in the area.