Don't Put the "O" Back in Outlaw 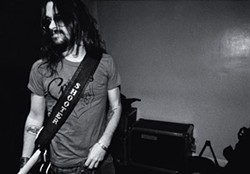 Waylon Albright Jennings, born in 1979, was spared a heavy "Jr." forever hung around his neck. His famous father slipped in a new middle name: Albright, named for Richie Albright, veteran road warrior and drummer of the elder Waylon's band. It was a fitting tribute, because wee "Shooter," as Daddy soon nicknamed him, spent much time in a crib on his parents' tour bus. The younger Jennings' never-ending road running brings him to the Visulite Theatre on April 15.

Shooter Jennings' mom, Jessi Colter, co-starred with Big Waylon on an epochal 1976 album, Wanted: The Outlaws, which also featured outlaw pioneers Willie Nelson and Tompall Glaser. In the mid-1970s, that LP turned out to be country's surprisingly successful answer to marketshare-biting rivals over on the rising Southern rock bandwagon. By the time of Shooter's debut appearance three years later, Southern rock had pretty much crashed and burned with Skynyrd -- or, at least, run out of gas with most of its other midnight riders -- but the migratory Jennings family was still layin' down the outlaw law.

In March 2003, Shooter, an adolescent defector to LA, finally laid his six-year-old glam metal band Stargunn to rest and headed back to Nashville. Jennings' vision for Stargunn -- something like Lynyrd Skynyrd mutating into Guns 'N' Roses -- had been deemed conceptually D.O.A. by the major rock labels. So Jennings returned to his roots, selling Universal South his already completed debut country album, Put The O Back In Country. It was commonly assumed the "O" was for outlaw. And why not? He was entitled, if anybody was.

Although Jennings did say that was what it stood for in at least one prerelease review, he has since denied it repeatedly: "The Outlaw Movement was a movement in time ... If you call yourself an outlaw now, your fly's unzipped."

He's got plenty of other Os, after all -- two in Shooter alone -- so he can spare one for donation.

As for the O-lessness of "country," well, um, market research has indeed shown that most country consumers are female. And Jennings explains that he wants to make music for "young people," not for "adult women," not predominately -- but y'all too, y'hear?

Yet mature women significantly influence his process. Jennings' ladyfriend Drea Di Matteo, late of The Sopranos and Joey, is an exceedingly well-preserved thirtysomething, and Jennings credits her with urging him to use Put The O Back In Country as the album title and theme song. "Put the O Back in Country" was written to the tune of Neil Young's "Are You Ready For the Country" (with permission), and also refers to Big Waylon's album and cover of the same title. The younger Jennings' re-tooling of this ancient tune bounces beats like basketballs, so the performance of the song seems even goofier (and much more likable) than its point. "Put the O" is about the risky need to rock the country -- as if "rebel" rock isn't a lucrative and established practice in country today. No need to sweat it, podner.

But -- just to prove me wrong about his need to worry -- the star-making machinery was a bit slow to crank up. And Put The O, finished in January of 2004, wasn't released until March of 2005. Meanwhile, Jennings enjoyed another fruitful encounter with an adult woman: his mother, Jessi.

Although Jennings has described recording rock experiments with his father -- a CD, with new backing tracks by the 357s, will reportedly be released this fall -- I hadn't seen any mention of his musical relationship with his mother. Not until after his father's 2002 passing, that is. In 2004, Jennings and Colter co-wrote and recorded the song "Please Carry Me Home." It's about sweating yourself dry of temptation's power, cold turkey and step-by-bare-step. Jennings' drums count out the cost, slowly, mercilessly. It's a disturbing song, for it implies the risk of losing desire along with banished temptation. Not a good idea because, as Smokey Robinson put it: "If you can want, you can care." Or (maybe), as long lost Southern rockers Hydra put it: You can "care enough to survive." But Jennings and Colter know this, and hearing is believing.

Although "Please Carry Me Home" is the only track he appears on, it's a fittingly dramatic climax to Colter's recent Out Of The Ashes (Shout! Factory), her first solo album, except for a couple of kiddie-song sets, in 22 years. Colter's gospel-schooled, piano-driven twists and turns on Ashes may well have provided some of the juice for Jennings' new Electric Rodeo (Universal South), which he began working on while Put The O was still unreleased.

However the transference of style happened, Jennings has really tapped the power of transitions -- within songs, as well as from one song to the next. The preachy jive of Put The O's and Electric Rodeo's title tracks now seem lived. One of the disc's key songs, "The Song Is Still Slipping Away," sounds as gentle as the debut's "Lonesome Blues" -- 'til the chorus slips in: "When your heroes turn out to be assholes, and the light that you're chasing in the tunnel is a train/The singer's in key, the guitar's in tune, and the song is still slipping away."

Jennings shrugs off his response to this disillusionment by trying to refuel with some "Hair of the Dog," but it doesn't rock him (or me) enough. So he chases that with "Little White Lines." And suddenly, he's bursting out with his Daddy's baritone and trademark "wun too, wun too" bass beats -- now almost discofied, which is certainly drug- and decade-appropriate. This twist in "Little White Lines" blasphemes against the supposed cultural separatism that "Outlaw" signified for some.

Mordant (and actually Waylonic) humor resurfaces throughout Electric Rodeo, especially in the shades of George Clinton and Tony Joe White-worthy swamptoon "Alligator Chomp (the Ballad of Dr. Martin Luther Frog Jr.)." Aw, you can figure out from the title how that ends, can't you?

But Electric Rodeo is not only a series of sardonic songs; it also shows Jennings maturing into an artist unafraid of vulnerability and sonic adventure. "Lil Waylon" addresses the weight of his Daddy's legend on a revival of Hank Williams Jr.'s "Living Proof," singing "You ain't as good as your daddy, and you never will be." This cover works out its tensions by opening with faithful homage to the original by country's most famous heir. And then Jennings and the 357s close with the habitual instrumental vamp Big Waylon used on many of his hits. If Jennings continues to flip the script so deftly, the road and the "Outlaw" weight may not do him in.