From what might have been to what we have left 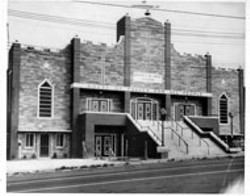 Summer in Charlotte is a drag sometimes: mostly it's just hot and humid and grungy. No wonder people escape to Myrtle Beach. If you live here, you tend to take what tourist attractions we have for granted. The NC tourism folks are apparently waffling on having named Concord Mills the state's number one tourist attraction, but statistics show the mall had more visitors than the Blue Ridge Parkway. If you're that into shopping as a sport, then so be it, but you're missing a lot and that's the real drag. North Carolina is a state full of interesting stuff from Blackbeard the pirate to the Brown Mountain Lights. The Old North State has, arguably, the most familiar lighthouse in America (Hatteras) as well as the largest privately owned home in the US -- no, not that thing at Princeton and Queens Road -- The Biltmore House in Asheville.

If you want something educational, historical, arty or just plain interesting, Charlotte's not such a wasteland. There's Discovery Place and the two Mint Museums (the original and Craft + Design), the Levine Museum of the New South and the Charlotte History Museum. If you like old homes, try the Hezekiah Alexander Homesite or Historic Rosedale or Latta Plantation. If you like nature, there's the Charlotte Nature Museum, the Carolina Raptor Center, Wing Haven and Daniel Stowe Botanical Garden. UNC-Charlotte also has a botanical garden. And that's just scratching the surface.

Could-a Been Tourist Attractions
The biggest drag for attractions in Charlotte involves the tourist "could have beens" because of our history of tearing down historic structures. The powers that be have usually felt that shiny new tall concrete boxes trump lowly historic homes or buildings any day. Charlotte may be considered somewhat conservative -- but that doesn't apply to its use of wrecking balls or bulldozers. Here, in no particular order, are some of the historic or otherwise interesting spots that you would have loved to visit -- but they just don't exist anymore.

The Masonic Temple, 329 S. Tryon Street, was demolished in 1987. It featured bold Egyptian Revival architecture that injected some personality into downtown.

Harry Golden was a nationally known journalist, civil rights activist, author and publisher of The Carolina Israelite. At the height of his career, he was read by millions of Americans. He worked out of his home on Elizabeth Avenue, which burned, then moved across the street into another house, where the main CPCC Parking Deck is now located. (Later, he also lived at a house at 1701 E. 8th Street, which is still there and should be a tourist attraction.)

Hotel Charlotte, 237 W. Trade Street, was demolished in 1988. Some important early bluegrass and country music recording was done at this hotel in 1937 when RCA used rooms as recording studios for Bill and Charlie Monroe, Roy Acuff, the Carter Family and others.

The Carolina Theater, 224 N. Tryon Street, is now mostly demolished but the shell of the theater is still there. This is the last of Charlotte's grand "movie palaces" where Elvis, Bob Hope and numerous others appeared -- and where The Sound of Music played so long, it was screened for more people than actually lived in Charlotte at the time.

The site of the Battle of Cowans Ford (February 1, 1781) is technically still there. It's under Cowans Ford Dam and the waters of Lake Norman. There's a monument, off Hwy 73, near the entrance to the McGuire Nuclear facility and Cowans Ford Dam complex. General William Lee Davidson, for whom Davidson College was named, was killed at this battle.

The House of Prayer for All People on McDowell Street, with its fabulous, Alamo-like facade, was torn down in 1970 as part of the urban renewal movement, which also destroyed Charlotte's entire Brooklyn neighborhood. The site is now part of Marshall Park. Charles Emmanuel "Sweet Daddy" Grace was a charismatic minister who preached at tent revivals before he founded the House of Prayer in 1926.

Not Open to the Public

Another drag is that there are a few places in the city that would make great attractions -- but they're not open to the lowly public.

Charlotte's best-known and most tasty export has to be Lance cookies, crackers and snacks. We love "em. A pack of Toastchee crackers or Nekots has saved us from starving many times. If you haven't eaten a Lance cracker lunch at your desk this week, then your bosses at the bank are wondering if you're working hard enough!

Lance, Inc., founded in Charlotte in 1913, used to offer tours to school groups. Alas, the company discontinued those tours about four years ago, according to spokesman Theo Watkins, due to cutbacks and then food safety concerns following September 11. Still, Lance offers an informative website (www.lance.com) and Watkins said there are other educational programs offered to schools as time permits.

It's also a shame that the public doesn't have the opportunity to see the area from the top of the city's tallest structure, the Bank of America Corporate Center. But according to an email from a BofA press person, they don't offer tours because "the building is a private office building and business is conducted on our top floors." Hey, that doesn't stop the Empire State Building from welcoming tourists, so lighten up. Back in the day when whatever Wachovia now calls that white building was the tallest thing downtown, we fondly remember eating dinner at Slug's Restaurant and looking out at the city lights from the top floor.

Charlotte may not have a ghost tour but the city does have its share of places connected with infamous and tragic occurrences. Some years ago, Creative Loafing presented "The Infamy Tour," an issue that offered a look at sites related to the city's more famous murders and other mayhem. Here are some highlights that you can look up on your own as a kind of alternate tour.

In the Derita neighborhood on July 4, 1979, five members of the Outlaw motorcycle gang were shot to death in what became known as the "July Fourth Massacre." The house was located at 2500 Allen Street. No charges were ever filed, although suspects included members of the Hell's Angels.

On July 27, 1990, local women's rights activist Kim Thomas was murdered in her home at 3853 Churchill Road. Thomas' husband, Dr. Ed Friedland, was suspected but has always maintained his innocence, going so far as to file a lawsuit against the man he believed committed the murder. The case remains open.

Two victims of Henry Louis Wallace, Charlotte's own serial killer, were found at the Lake Apartments on Albemarle Road. Wallace was eventually convicted (January 1997) and sentenced to death for nine counts of murder.

In another sort of infamy, there are several sites in the area connected with the PTL scandal. One place is 200 N. McDowell Street, then the law office of Harold Bender, who was representing evangelist Jim Bakker. In the middle of the trial, Bakker collapsed in Bender's office and crawled under the couch, apparently having a nervous breakdown over the whole mess. And of course, south of the city, off I-77 near Fort Mill, there's the site of what was Heritage USA, the home of the Bakkers' televangelical empire. Wonder what they did with all those Christmas lights?

The corner of South Boulevard and Morehead Street is where, on August 25, 1919, five trolley workers were killed by police during an impassioned transportation strike.

In April 1972, on Sixth Street, where City Fair was once located and the Hearst Building now looms, someone broke the windows of Crazy Horse Books. Crazy Horse Books was a leftist store run by a collective, including members of Charlotte's own leftwing hippie commune, the Red Hornet MayDay Tribe. Two tribe members slept in the store the next night, after repairing the windows. They were awakened at 2am by the sound of the windows breaking again. The perps? Three Charlotte policemen -- in two cars -- using a pellet gun. The tribe members dutifully noted the police car numbers and eventually the three were suspended from the force.

Since the "Infamy Tour" story was written, a couple of other sites could be added: Hornets basketball player Bobby Phills crashed his car on Tyvola Road near the Coliseum. Former Panthers football player Rae Carruth's pregnant girlfriend Cherica Adams was shot while she was driving on Rea Road, north of the Hwy 51 intersection and south of the Colony Road intersection. And if you tour the Mecklenburg County Jail, they can show you the cell where Carruth was held after he was charged in connection with her murder.

Last but certainly not least, what was at the time the second largest cash heist in US history started in the Loomis Fargo facility at 2050 Suttle Avenue on the night of October 4, 1997. Yep, that's where David Ghantt loaded up a van with 17 million bucks and drove to Gastonia where he divided the loot with a gang of folks who later plotted to kill him.

Latest in Best Of