The man with the sauce

Just seven years after its opening, Sauceman's has consistently been a contender in the "best barbecue in Charlotte" conversation with its no-nonsense, Lexington-style barbecue. And no one is more confident in Sauceman's style than general manager Edmar Simoes.

Originally from Brazil, Simoes had never made Southern-style barbecue when he took the job at Sauceman's six years ago. But it's safe to say he adapted nicely. 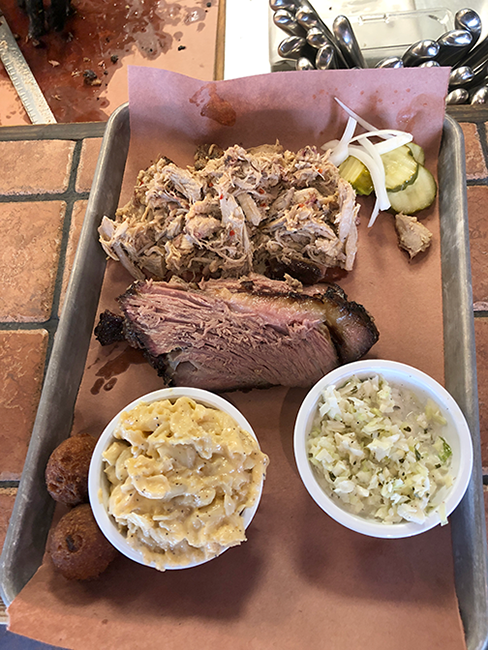 Simoes moved to Charlotte in 2012 after spending 10 years in Boston. He had worked in the restaurant industry before, but never on a concept quite like Sauceman's. After two years as a manager at a local Chipotle, Simoes got to know Cole Gray, the former owner of Sauceman's. Gray hired him, and Simoes easily picked up the ins and outs of running and cooking for a successful barbecue joint.

"I believe in old-school cooking," Simoes says. "We just keep everything as simple as possible."

Focusing on the barbecue and keeping the menu easy to navigate are parts of why Simoes says Sauceman's is so special. That and the fact that everything is made fresh. From sauces and sides to hunks of delicious and tender brisket, everything is made in house and never reheated.

"I get everything as fresh as possible," Simoes says. "I buy the best meat on the market."

Michelle Gray, who is in charge of the restaurant's catering services, also credits freshness as an important part of Sauceman's appeal. But she says the locally owned, authentic Southern vibe is a big reason why people love the restaurant.

"It's kind of like it just sticks with people once they eat it," she says. "It's like it's always on their mind."

The sausage, chicken, brisket and pork plates are all popular among customers. Hogs are cooked for 14 hours over hickory and oak, which packs a big flavor.

Sauceman's bar manager Stephanie Helff says the sausage is "hands down" her favorite meat on the menu. While it may not be the item that brings people in, it's built its own loyal following.

"We sell out of it like everyday, but not a lot of people think to order it [on their first trip]," she says.

The star of the show, however, remains the pork, prepared with a little vinegar in the mornings during prep to keep it nice and juicy. The saucing, however, is left up to the customer. The barbecue is Lexington style, but customers can choose to dress their dish with a vinegar-based, mustard-based or smoky barbecue tomato sauce. 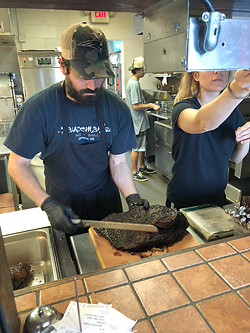 Helff says that true Sauceman's fans know to stop by the fridge near food pickup and grab a bottle of Alabama white sauce, or "the secret sauce" as she calls it. Regulars swear by it and use it on the pork, sausage, even on the sides.

If barbecued meats aren't your thing, there are plenty of vegetarian-friendly sides to choose from, something that can be rare from a traditional smokehouse.

"Our onion rings are the best," Simoes says. "Any fried item, you'd be surprised how good they are."

The staff even keeps a warm batch of pork rinds heating in a machine for customers to grab with tongs while they wait for their food.

Simoes says that the secret to Sauceman's fried goodness is changing the oils every day, keeping everything as fresh as possible.

Helff's favorite side is the more unusual fried corn on the cob. "People think it's weird," she says. "They're like, 'Fried corn, what is it?' But it's the best thing."

Aside from the classic pork plates that are most popular around lunchtime, Sauceman's serves up tons of ribs on Saturdays.

"I don't know why," Simoes says, "what's the reason, but I feel like people feel more comfortable eating ribs on Saturdays, so they get their hands dirty."

While there are always a lot of regular faces in the crowd, Simoes says Sundays bring in a lot of new customers who heard about them during the week.

One of the perks to serving a classic, Southern staple for Simoes is having confident, no-frills customers.

"They know what they want, they know exactly what they're looking for already," Simoes says. "You don't see a customer in here like 'Oh, what's this?'" (Save for the fried corn, of course.)

And the customers turn out in droves during lunch time, as the restaurant is nicely situated between Dilworth and Wilmore in the South End neighborhood.

"Lunch is a money machine," he says.

On a recent Friday, two Sycamore Brewing employees stopped by Sauceman's for "The Pig," a plate of barbecue, hush puppies, slaw and a side.

"The beer selection is always great, their food selection is fantastic, it's a lot of bang for your buck," said Scott Jenkins. "They provide so much food, it's so delicious."

His coworker and lunch companion, Archie Gleason, described the food as "really well-done Southern barbecue." Both men said they visit Sauceman's for lunch once or twice a week.

Aside from lunch, catering is an important part of Sauceman's business. In fact, Gray said it makes up about 30 percent of total sales. While corporate meetings account for most of the restaurant's catering business, during football season, Gray is a regular at some Panthers tailgates.

So far, dinner crowds still don't compare to lunch time, but Simoes said the business is growing. Sauceman's recently expanded its hours to stay open until 9 p.m., allowing for a longer dinner rush, but Simoes said it's common for lunch to be so crazy that they start selling out of items by 7:30 or 8 p.m.

Changes to the hours aren't the only updates to the restaurant since it opened in 2011. Last year, Sauceman's debuted new renovations that allowed for a much larger sitting area and full-service bar. The remodel elevated Sauceman's from a quick hole-in-the-wall lunch spot to a place to sit down and hang out. Simoes said Sauceman's sales tripled after reopening.

Simoes said the team reassesses the menu every couple years, but it's important to keep things simple. The most recent addition to the menu was actually the return of an old favorite: the Dixie Cuban, which includes either pork or brisket with chipotle cheddar cheese and fried pickles on Texas toast.

What's not changing is Sauceman's location. Simoes says that he loves his neighborhood and all the hustle and bustle that comes with it. He doesn't mind the rapid change that's happening around him.

"Every month you look, four or five more restaurants," Simoes said of Charlotte's growth. "Which I like. (It) keeps everyone busy and brings more people to South End."

Regardless of how much competition comes around, Simoes remains confident in the product he's putting out.

"Some people don't like it when a new restaurant opens," he says. '"Oh my god now it's gonna take some of my customers,' I don't see it that way."

Ultimately, Simoes is glad that he left Boston and made the trek to Charlotte. From having never cooked barbecue before to managing one of Charlotte's best barbecue spots, he has discovered just how much North Carolinians covet their 'cue.

"Here, everybody likes the barbecue."

We can't argue with that.