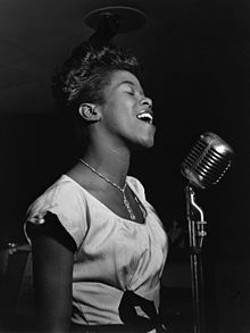 When: Fri., April 27 and Sat., April 28 2018
After much-acclaim and sold-out performances, Charlotte’s Jazz Arts Initiative’s (JAI) monthly series—The Jazz Room @ The Stage Door Theater – kicks off season 11 on April 27 & 28 with Eileina Dennis singing a special Jazz Appreciation month tribute to the legendary divine songstress, SARAH VAUGHAN. The Stage Door Theater is part of Blumenthal Performing Arts Center, at the corner of 5th and College in Uptown Charlotte. New Jersey native Sarah Vaughan won a talent competition held at Harlem's Apollo Theater that launched her remarkable singing career. In the 1940’s she worked with bandleaders Earl Hines and Billy Eckstine before going on to be a successful solo performer. While working in Eckstine’s band, trumpeter Dizzy Gillespie and saxophonist Charlie Parker introduced the group to a new form of jazz known as bebop which was to inspire her singing. Although Vaughn was given the nickname “Sassy” as a commentary on her onstage style, after her departure to strike out on her own, she was dubbed “The Divine One.” The 1950’s saw Vaughan produce more pop music, singing "Whatever Lola Wants", "Misty" and "Broken-Hearted Melody," which sold more than a million records. Vaughan gave concerts in the United States and Europe, and her singing was also heard in films such as Disc Jockey and Basin Street Revue. Vaughn possessed an emotional, vibrato-rich delivery, three-octave vocal range and captivating scat technique. Over the years, she collaborated with notables such as producer Quincy Jones, pianist Oscar Peterson and conductor Michael Tilson Thomas under whose baton she won her first Grammy for Gershwin Live! in 1982. Sarah Vaughn died of lung cancer in 1990. Vocalist Eileina Dennis was raised in Birmingham, England. A minister’s daughter, Dennis sang Gospel throughout her teens. After relocating to London where she had a notable career as an R&B and pop singer and performing alongside noted artists such as Randy Crawford, Paul Young, and the Italian rock star Zucchero Fornaciari, Dennis found a new love: jazz. Musicians from all musical genres have influenced her artistry including Jelly Roll Morton, Louis Armstrong, Charlie Parker, Miles Davis, Count Basie, Duke Ellington, Bessie Smith, Ella Fitzgerald, Carmen McRae, Betty Carter, opera singer Leontine Price, and of course, the incomparable Sarah Vaughn. Of Sarah she says, “…I am an admirer of Sarah Vaughan... there will always and only ever be ONE Sarah.... I'm not in the business of emulating or trying to be ‘Sassy’ ... All I can do is to perform well, and to try to reach the bar of excellence which has been set...”