Exploring both the dream state and the Queen City 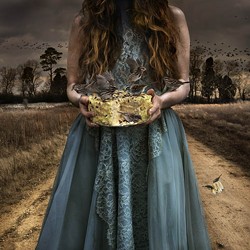 From dream states to the state of the street, two photography shows now at The Light Factory offer invitations into two distinct alternate states of consciousness. Suspicious Minds offers idiosyncratic, surreal dream states; Unfiltered: Steve Perille offers time transport to Charlotte, N.C., in 1973. The photographs in Suspicious Minds are experimental, fantastical and will challenge your patience; Unfiltered is as familiar and surprising as a toothbrush on the sidewalk. Neither show is cloying or comforting, and both are worth the journey beyond our personal comfort zones.

Suspicious Minds features photographs of dream states, and only the best communicated dream states reach out to touch anyone but the dreamer. Most of these photographs remind me of someone describing a bizarre dream he had — offering up a description of remembered images, attempting to convey the remembered emotion firing the images. That's a trick rarely achieved by the teller of the dream. Same here — rare hits.

"Spring Arm," by Robert and Shana ParkeHarrison, is a sinewy forearm supported by a mechanical armature. Vegetation sprouts from the skin between the wrist and the soft spot under the elbow. Flowers bloom from the flesh; butterflies flutter above. It's a stark and disturbing image and one of the best in the show — best because it brings into sharp focus and describes matter-of-factly what is utterly unreal. I buy the artists' dream because it evokes my connection to this living earth, our shared cyclical potential for rebirth, and my organic connection to seasons.

In a photograph by Jerry Uelsmann, a wide sinkhole appears in the ocean off a rocky coast under a dark, stormy sky. The sun pierces the gloom, a naked woman rises, arms aloft, through the mist. This photograph is not only dreamlike, but like a dream I had, or may have had, and it transports me because of that. Like all the photos and videos here, Uelsmann's "Place of Several Mysteries" has skewed my reality, but unlike most here, this photo prods me to jump aboard.

Malena Bergmann walks naked through a creek bed. Long, fine fish lines attach the ends of her hair to little translucent, pod-shaped vessels. She pulls the pods across rocks and water. She submerges into a still spot and floats belly up. It's a dream state; it means something to her. I recognize her journey through waters rough and deep, and her rest, and perhaps her safe delivery of her vessels, but I can't follow her. She's telling me her dream and I nod.

Steve Perille was a photographer for the Charlotte Observer in the 1970s. Unfiltered: Steve Perille was culled from thousands of Perille's photographs, edited gems curated by his friend and colleague Byron Baldwin, Charlotte's best photographer. These photos date from 1972-1974. Surely having taken so many photographs, Perille sometimes got lucky capturing the essence of being there a few times. But that he snatched that essence so many times, and composed so many in such a way as to allow us instant assimilation — that's a gift.

Most reading this didn't live in Charlotte in 1973, and the few who did may not be old enough to remember images from that time. Yet most viewers will here recover memories they never had — of places, faces and things. These photos have the capacity to tap into our wandering collective's unconscious connections.

"Hair doo — S&W Grill" is a shot of two women in a luncheonette. The seated woman sports a rear-projecting beehive — a shiny, aligned conical plume bolting out the backside of her head. The standing woman's doo is stacked like a second head wrapped in a burka perched above her face. The skirt and pants they wear are from the wardrobe room of the '60s TV show Shindig! The women are surrounded by the plastic newness of the 1960s. I can smell the perfume from here.

"August Jam" is the blowback from last night's celebration. A girl lays slack in flip-flops, jeans and tank top atop her bare-chested man laying belly up on a patch of scruffy grass. The sleepers are surrounded by Schlitz empties, cigarette butts and other recovering celebrants. The faces of the conscious look drawn and bedraggled. The sleepers' faces look gratefully vacant.

Perille's 1973 Charlotte is sideburns and cigarettes, battered stock cars and skinny white boys guzzling RC Cola. His world is plastic purses, leather faces and Lucky Strikes, bar stools, baggy eyes and sunlight cutting low through dusty windows on a late Sunday afternoon. It's a small-scale, steel and glass and concrete Charlotte, before we dosed our downtown with two decades of industrial growth hormone.

It's Charlotte, 1973, as remote as a memory from my first life, and as close as the dirt beneath my nails.

Speaking of The Light Factory