Fall into optimism at the theater 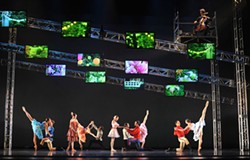 Since the demise of Charlotte Repertory Theatre in 2005, there has been a constant low hum of despair about the local theater scene and its failure to regain regional prominence in the production of adult dramas. With the recent shutdown of Carolina Actors Studio Theatre under eerily similar circumstances, that hand-wringing isn't likely to subside soon.

Homegrown comedy production, in the meanwhile, has continued merrily along, aided by the impressive development of the local fringe scene. Charlotte's fringe blossomed into a NoDa-Elizabeth-Plaza Midwood festival last fall and will return in odd-numbered years next season. The real cause for celebration is our proficiency in producing homegrown musicals.

Once the exclusive province of Central Piedmont Community College's Summer Theatre, polished musicals have been produced in recent years by Actor's Theatre, Children's Theatre, Queen City Theatre and Theatre Charlotte, as well as the dearly departed CAST. So the touring productions Blumenthal Performing Arts will be bringing us with its Broadway Lights Series — beginning with Once (Sept. 30-Oct. 5) and continuing with Rodgers + Hammerstein's Cinderella (Nov. 4-9) — no longer arrive as desperately needed relief for a parched landscape.

Kicking off its 2014-15 mainstage seasons, Theatre Charlotte's Footloose (Sept. 5-21) and the world premiere of a new musical adaptation of 101 Dalmations (Sept. 19-Oct. 19) at Children's Theatre of Charlotte should also deliver some serious dazzle — assuming these companies remain serious about drumming up season ticket sales. Riding the momentum of last fall's Les Miz, CPCC Theatre's They're Playing Our Song (Sept. 26-Oct. 5) arrives to a chorus of heightened expectations.

On Q Productions revives Jermaine Nakia Lee's For the Love of Harlem (Oct. 8-18), a fine paean to the Harlem Renaissance with music by Tyrone Jefferson, to kick off their sixth season, with the company in better financial health than ever before. It also arrives amid an unprecedented explosion of African-American acting and directing talent in the Q.C.

The excellence of Sizwe Bansi Is Dead back in February was a mere foretaste of the string of newly integrated productions to come, including Julius Caesar, Measure for Measure and Five Women Wearing the Same Dress. We can't imply that On Q has even begun to take full advantage of this influx of black talent, but we can be excited about seeing the results when it inevitably does.

We probably shouldn't include The Great American Trailer Park Christmas Musical (Dec. 3-28) in our guide, because it officially opens at Actor's Theatre of Charlotte during CL's holiday season. But ATC is packing three preview performances around Thanksgiving (Nov. 26, 28-9), this side of our holiday borderline, giving you a thankful chance to sample its trashy, irreverent, off-Broadway style of musical at a discount.

No, Actor's Theatre isn't missing out on kicking off its season with a splash, since the company is opening with Christopher Durang's 2013 Tony Award winner for Best Play, Vanya & Sonia & Masha & Spike (Oct. 22-Nov. 8), with a similar set of previews for the young and cheap. Given Actor's' track record with comedy — and the ace cast that was leaked to us — it's in the best of hands.

The fall slate is not overflowing with fresh drama, unless you've never seen the stage version of Harper Lee's To Kill a Mockingbird (Oct. 24-Nov. 9), to be revived at Theatre Charlotte, or Yasmina Reza's Art (Nov. 14-23), slated for a Three Bone Theatre exhumation. A fresher option is the previously postponed world premiere of A Disturbance in White Chapel (Oct. 28-Nov.3), a new take on the Jack the Ripper rampage strategically scheduled to coincide with Halloween.

If Citizens of the Universe's previous adaptations of Princess Bride, Reservoir Dogs, Trainspotting and The Big Lebowski are a reliable barometer, White Chapel at UpStage in NoDa should be low-budget nirvana. For a parallel Halloween journey beyond category, check into Omimeo Mime Theatre's latest installment in its ongoing Black Light Magic saga, Halloween Dream (Oct. 24-Nov. 1) at ImaginOn.

With many operatic and symphonic companies teetering on the brink or collapsing elsewhere around the country, the comparative serenity of Opera Carolina and Charlotte Symphony Orchestra is also encouraging. Opera Carolina goes Old Testament with Nabucco (Oct. 18, 23, 26), not the pinnacle of Giuseppe Verdi's achievement but surely the opera that established the composer's star in the firmament.

With a new name, Charlotte's best performing arts company Charlotte Ballet (formerly North Carolina Dance Theatre) is determined to get physical this season. Nothing will get the job done more seductively than the return of Sasha Janes' most impressive choreography to date, his adaptation of Dangerous Liaisons (Oct. 9-11) at Knight Theater. Paired with that 2012 stunner, balletomanes will be pleased to see Charlotte Ballet's latest revival of George Balanchine's The Four Temperaments.

As for special guest appearances, the Marsalis family sweeps the musical field in classical and jazz. Conspiring with The Chamber Orchestra of Philadelphia, saxophonist Branford delivers masterworks by Handel, Bach, Vivaldi and Albinoni in An Evening with Branford Marsalis (Oct. 24) in the Charlotte Concerts series at Halton Theater. Nonpareil trumpeter Wynton brings the Jazz at Lincoln Center Orchestra (Oct. 7) to Belk Theater in a Blumenthal Performing Arts presentation glorifying the works of Ellington, Mingus and Coltrane.

Another reason to be upbeat about the arts in Charlotte.