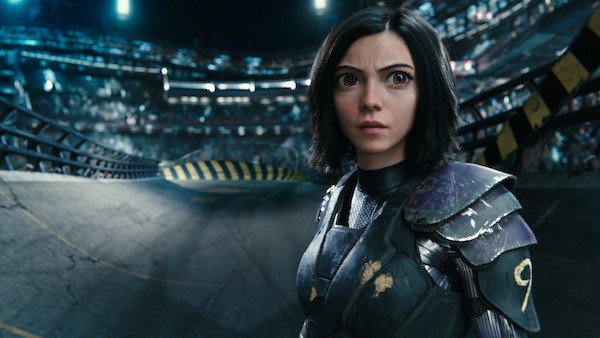 Produced by James Cameron and directed by Robert Rodriguez, Alita: Battle Angel (** out of four stars) is a visually ugly and unseemly movie — and that’s meant as the highest compliment possible.

Adapted from Gunnm (aka Battle Angel Alita), a manga series created by Yukito Kishiro back in 1990, this expensive endeavor takes place in a post-apocalyptic future in which the masses toil in squalor, the one percent live in the cloud city of Zalem, and the most popular sport is a death-and-destruction game called Motorball (basically Rollerball, minus James Caan).

Dr. Dyson Ido (Christoph Waltz) is one of those scraping together a living on Earth, and he’s excited when he discovers the remains of a female cyborg in a junk heap. Possessing a functional human brain, this cyborg is rebuilt and brought back to life by Ido, who calls her Alita (Rosa Salazar). That was actually the name of Ido’s murdered daughter, and this new christening annoys his ex-wife Chiren (Jennifer Connelly), who’s presently working alongside a corrupt businessman known as Vector (Mahershala Ali). It turns out almost everyone — Chiren, Vector, the mysterious Nova (an uncredited cameo by a three-time Oscar nominee), the murderous cyborgs Zapan (Ed Skrein) and Grewishka (Jackie Earle Haley) — wants a piece of Alita, and it’s all the poor girl can do to stay alive and intact. Luckily for her, it’s soon revealed that she’s not some docile teenager but rather a fierce, ages-old warrior with uncanny fighting abilities.

As far as the world-building is concerned, Alita: Battle Angel isn’t as eye-popping as 2017’s Ghost in the Shell, another anime property that was transformed into a live-action offering. It also isn’t any more impressive than what was conjured for last December’s box office bomb Mortal Engines. Where the movie excels is in the design of its metallic characters. There’s something both unsettling and exciting in seeing human faces grafted onto otherwise all-hardware bodies, and it’s the only instance in which the film feels like it’s breaking any new ground.

Otherwise, there isn’t much in Alita: Battle Angel that warrants attention or excitement. Alita herself is an interesting creation, but Salazar is limited in her ability to breathe life into this CGI construction — since it’s a motion-capture performance, perhaps Andy Serkis should have been tapped to play the part (just kidding … kind of). Ido is also a potentially fascinating character — a scientist who doubles as a hunter-killer (aka a bounty hunter, not a Gerard Butler flop about a submarine) — but Waltz plays the part as too much Geppetto and not enough Dr. Frankenstein. Waltz has no problem piling on the twitchiness (Inglourious Basterds, Big Eyes), but here’s he’s too sweet-natured to be believable as a man who bludgeons fugitives in his spare time.

Narratively, Alita: Battle Angel is so focused on the sequels that (may or may not) lie ahead that it cobbles together too many story strands and then rushes through them anyway. This results in some lapses in logic (Alita doesn’t recognize anybody in that rigged Motorball game?) as well as a serious deficit in defining key characters. Connelly’s Chiren does a moral about-face that would scarcely be believable in an old episode of Highway to Heaven, let alone here. On top of all this clutter, there’s a romance between Alita and a pretty-boy street kid (bland Keean Johnson) that turns out to be particularly insipid.

The romance also skims over what should have been one of the defining themes of the film had it been directed at adults instead of young children: Alita’s sexual identity. Here’s a 300-year-old half-human, half-cyborg who’s modeled after a man’s dead daughter, who’s given breasts on her metallic child-like body, and who’s engaged in a relationship with a teenage boy. I daresay Freud, Kinsey and Dr. Ruth would all have had their hands full trying to sort this one out.