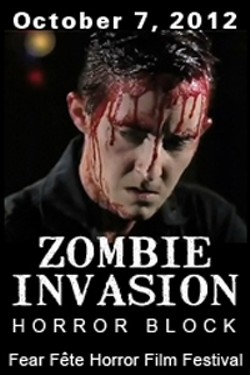 Emily (5 minutes, Louisiana) Emily is a somewhat regular girl. She lives with her mother and step-father and loves to play with dolls. Emily's dolls, however, are not like other girls dolls. A fact which her step-father will find out the hard way. Play time is over.

Zion (32 minutes, Mississippi) As mankind tries to pick up the pieces of a shattered world, the ultimate decision must be faced when a horrifying tragedy strikes a secluded rural family.

A Cadaver Christmas (86 minutes, Iowa) An unlikely band of heroes charged with the task of saving the world from an army of living corpses that are quickly recruiting new members. The dead have been given the gift of life this Christmas, and it's up to a university janitor to take it back!

Fear Fete Festival Zombie Invasion Block is not showing in any theaters in the area.