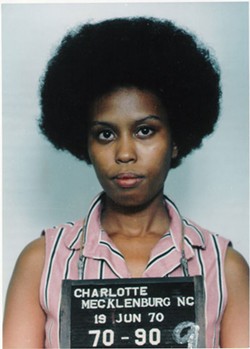 Patrice Gaines' life has been an observation in what my mama would call "learning the hard way." She forged ahead through bad relationships that exposed her to abuse and drugs and the low self-worth that was at the core of every wrong turn she made during her early years. All of this life experience coupled with the constant need to purge everything into diaries, led the one-time felon into the field of journalism and the Washington Post.

Gaines spent her first five years isolated on a military base in Quantico, VA. Like most military brats, she was misguided in thinking the world ran as efficiently as the base she called home, except for the occasional teacher who suffered from "spells" induced by Gaines' brown skin. Small things like this and her father's perceived disinterest drove her to seek power anywhere she could find it, once even landing her in jail for holding heroin for her boyfriend during a concert.

Always having a knack for "bouncing back," Gaines went on to receive journalism training from the Maynard Institute for Journalism Education in California, which led her first to the Miami News and then the Post. She would eventually win the National Association of Black Journalists' Award for Commentary and receive a nomination for the Pulitzer Prize in journalism. Gaines published her memoir, Laughing in the Dark: From Colored Girl to Woman of Color -- A Journey from Prison to Power, in 1995. Her second book is entitled Moments of Grace: Meeting the Challenge to Change.

Creative Loafing: Do you think a person's view of racism is mostly their own perception? What they want to see?

Do you think education plays a role in what you're able to do, despite racism?

Overall, I would imagine it would have. There are a lot of disenchanted black people that don't believe that it will make a difference. If you are from a family where you see it's made a difference, or that even if your parents can see it, even if they didn't do it, then they believe it, then they're going to appreciate it. But, if you come from a family and your mama doesn't believe it, it's going to matter, she's never really pushed you, you know, that education is going to make a difference. Her perception, that racism will counteract all of that. It's that whole idea that you can have some control in your life, so they begin to lay out the plan early on.

And how do you feel about the breakdown in the black family? That black men aren't stepping up and leaving single mothers to carry all the weight?

I know people say this, but I'll say this, and this is my belief about everything: We're all responsible for everything that happens on this earth. If I was to believe that black men aren't stepping up, I am responsible for that also. It would be like the war in Lebanon between Lebanon and Israel right now. I am responsible for that. I believe that we all create the world in which we live. I am not separated from those people, from the Israelis or the Lebanese. I think part of our problem is we don't understand that. I mean, does the water know it's separated? No, but people make those separations. I don't say it is a black man's fault or the black family's fault or the white people's fault. I say, what is the role I have played in creating a situation in which it looks like black men don't step up?

In your opinion, what's a woman's greatest power?

I think that we really are quite sensitive, in the sense that we are more in touch. And this is very general, more in touch I think with the earth, or with our intuition. I think that's real. If in fact, we want to understand that and develop it and all that. Only because I think the role we have played for so long allows us to develop that intuition. I think maybe long ago that women realized if men weren't going to allow them to do certain things that they had to find other means.

You're not talking about sexuality, are you?

No. They had to develop a quiet power. And so when you have a quiet power, people tend to think you're not powerful. They don't even recognize when you make them think that they've made the change. It's OK for us to cry. I think that has been very good for us. It has allowed us to stay more in tune with what is going on in the world, in our families' lives.

Currently, Gaines is with her Brown Angel Center, headquartered in Charlotte. It was founded in 2004 and offers services and products nationwide aimed at healing and empowering women and teenaged girls. Its goal is to help all women become financially, mentally and spiritually healthy. For info: www.patricegaines.com/brownangel.