Fighting On All Fronts 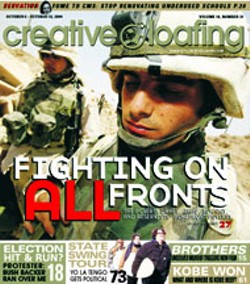 "I volunteered for the Army on my birthday
They draft the white trash first round here anyway..."
-- Steve Earle, "Copperhead Road"

A large percentage of the men and women who carry the war in Iraq on their shoulders entered the military straight from the small towns of rural America. They were looking for something more from their lives -- anything more than what they had. An opportunity. A job. Money for college. Travel. We all know the jobless dead-end towns they left behind if only from watching the return of POW PFC Jessica Lynch to her tiny hometown of Palestine, West Virginia, on CNN. The shabby downtown area is empty of life except for a few halfhearted storefronts, the surrounding neighborhoods are filled with overstuffed tract homes, retirees and their out-of-work children co-existing in a state of love and resentment. If they're lucky, the younger generation has scraped together the cash to park a trailer home in the back yard in a desperate bid for privacy. When a new strip mall opens up on the city limits, complete with a Wal-Mart and a McDonald's, the stampede for cheap goods is only matched by the run for the jobs such places bring to depressed small town economies.

One of the escapes from this dusty life of desperation is the United States military, whose recruiters are sent into the schools and parking lots of these towns like a pack of well-starched car salesmen looking for easy targets.

One of the deciding factors in the fall of the Roman Empire was the growing numbers of the poorer, conquered populations entering the ranks of the Roman army. The interests of these Roman soldiers were less of conquest than of feeding their families. During the US Civil War, Irish immigrants fleeing the poverty of their own land were met at the ships when they arrived stateside to be conscripted into the Union Army.

In this era, the question is: now that the war in Iraq stretches to the horizon like a Kansas blacktop road, should those who joined the military in search of a better life or money for college continue to bear the lion's share of duties in this war? Their deployments are being extended in order to avoid the inevitable. Democratic Presidential hopeful John Kerry made the point during a speech in veteran-rich West Virginia that the Bush administration has "been effectively putting into place a backdoor draft and refusing to let them out," in reference to the current practice of extending deployments into infinity to avoid the political hot potato of a draft -- a subject Kerry himself has danced around.

Wanted: Youth With Few Opportunities
Would Americans who support the war be so enthusiastic if, instead of some of America's poorest young citizens, they had to cope with sacrificing the lives of, say, the sun-browned boys we see out on Lake Norman in daddy's speedboat?

Irish political leader James Connolly defined economic conscription as "The policy of forcing men into the army by depriving them of the means of earning a living. Fighting at the front today there are many thousands whose whole soul revolts against what they are doing, but who must, nevertheless, continue fighting and murdering because they were deprived of a living at home ... recruiting has become a great hunting party in which the souls and bodies of men are the game to be hunted and trapped."

Connolly was executed by the British in 1916, but his thoughts on economic conscription are frighteningly current as the American military often seeks out those whose chances for good jobs are slim.

The recruitment offices in Charlotte, for instance, are located near some of the city's poorer neighborhoods. The multiple recruitment offices located in the government office-filled Midtown Plaza near Midtown Square could easily be explained away as a way for the government to save on rent money, but there's little doubt that proximity to the neighborhoods near the Morgan Neighborhood Park provide an advantage for recruiters. The Army Recruiting Office on Milton Road in Charlotte is more obvious. It is sandwiched between a Spanish Christian bookstore and empty storefronts, some with bars on the windows and stairways.

But the inner city isn't where most of those serving come from. Kannapolis, NC, is more the right speed. A recent New York Times article stated that today's military "resembles the makeup of a two-year commuter or trade school outside of Birmingham or Biloxi far more than that of a ghetto or barrio or four-year university in Boston."