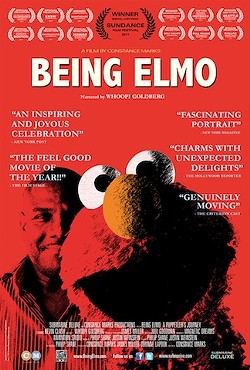 When: Thu., Dec. 15, 7:30 p.m., Fri., Dec. 16, 7:30 p.m. and Sat., Dec. 17, 7:30 p.m. 2011
It's no secret that Elmo is one of the most iconic muppets in the biz. The furry fire engine red character rules the toy aisles. No surprise, his giggles can be rather annoying after one too many presses of the tummy, but they can also be a blessing in disguise for intoxicating children - and that's all thanks to a man you've probably never even heard of: Mr. Kevin Clash. Clash, the master behind the popular personality, set his stakes high after deciding to pursue the rather delicate world of puppetry. He ultimaely became a major force in the creative direction of the TV sensation, Sesame Street. The Light Factory's First Run Film series' screening of Being Elmo: A Puppeteer's Journey is an insightful documentary into Clash's journey. You'll find out how he got to Sesame Street and hear interviews with celebrities - Frank Oz, Rosie O'Donnell, Whoopi Goldberg, Carroll Spinney, more - on the matter. You may want to hug someone after it's all said and done. Just remember, "Elmo loves you." Additional screenings at The Light Factory. For more information, visit www.lightfactory.org.
— Anita Overcash