Eastern Promises, The Game Plan, In the Valley of Elah, more 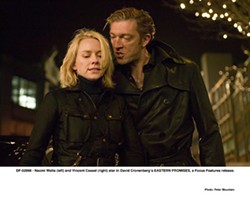 EASTERN PROMISES In a sense, Eastern Promises is a bookend to the last film made by director David Cronenberg and star Viggo Mortensen: 2005's excellent A History of Violence, about an ordinary cafe owner who may or may not have been a vicious mobster in his earlier years. Both films run along parallel tracks, full of whispery menace, marked by probing studies of masculinity at its extreme boundaries, punctuated with bursts of sexual and violent excess, and coping with abrupt endings. A History of Violence's hurried third act still carried enough weight to leave viewers satisfied, but Eastern Promises falls a bit short in the final count, taking some turns that are far more conventional than just about anything Cronenberg has ever done in his long and eccentric career and not allowing viewers enough time to come to terms with these contrivances. As Nikolai Luzhin, a taciturn chauffeur who works for the Vory V Zakone outfit (the Russian mafia) in London, Mortensen delivers a measured and restrained performance, whether dealing with the drunken son (Vincent Cassel) of the powerful crime lord (Armin Mueller-Stahl, absolutely chilling as the soft-spoken yet vicious kingpin) or trying to protect a hospital midwife (Naomi Watts) whose recovery of a dead prostitute's diary places her right in the middle of a particularly sordid scenario. A steamroom sequence in which Mortensen's character fights two assassins in the buff is sure to generate plenty of Internet chatter – if only Frodo could see him now. ***

FEAST OF LOVE Across the Universe, the Julie Taymor film scored to a catalogue of Beatles tunes, has yet to reach Charlotte, but in the meantime, here's Feast of Love to offer its own interpretation of one classic Fab Four tune: "All You Need Is Love." A sprawling, messy yet occasionally affecting adaptation of Charles Baxter's novel, this finds Oscar-winning director Robert Benton (whose last film was the grossly underrated The Human Stain) orchestrating a series of intertwined storylines that all push force the notion that the true meaning of life can be found in the arms of a loved one. Morgan Freeman once again plays his stock role, a gentle soul who's smarter than everyone else around him; here, that translates into the character of a happily married professor who notices that love – and, in some cases, lust, deception and betrayal – is all around him. In what could probably be construed as first among equals in terms of the competing storylines, he befriends a coffee shop owner whose wife (Selma Blair) leaves him for another woman and who then becomes involved with a realtor (Radha Mitchell) who can't seem to break off her affair with a married man (Billy Burke). The Mitchell-Burke relationship is given plenty of screen time on its own; ditto the puppy-love romance between two young coffeehouse employees (Alexa Davalos and Toby Hemingway). Happiness and tragedy are doled out in equal measure – usually falling where we expect – but a fine cast and some touching moments help make the film if not exactly a feast, then at least an edible appetizer that will keep our hunger for a great movie romance at bay a while longer. **1/2

THE GAME PLAN After his film career began floundering, action star Vin Diesel turned to the family audience with The Pacifier and ended up with a $113 million hit. Along the same lines, Dwayne "The Rock" Johnson now throws himself on the mercy of the small fry and their easy-to-please parental units with The Game Plan, an innocuous mediocrity whose biggest sin is its punishing running time. Rocky stars as Joe Kingman, a narcissistic quarterback who's blindsided when 8-year-old Peyton (Madison Pettis) shows up on his doorstep claiming to be his daughter. Livin' la vida loca with a lavishly designed bachelor pad, a European model for a girlfriend, and a flashy sports car to complement his lifestyle of the rich and famous, Joe (whose clunky gridiron nickname is "Never Say No Joe") learns that in order to become an effective parent (which he does so begrudgingly), he has to accept a pink tutu being placed on his bulldog, his football trophies getting BeDazzled, and his mode of transport getting downsized to a station wagon. Considering that The Game Plan holds next to no surprises for anyone who's ever seen a movie before, a 90-minute length would have been plenty; instead, this gets mercilessly stretched out to 110 minutes. Pettis mostly relies on calculated precociousness, but Johnson actually proves to be Rock-solid as Kingman, displaying modest but sufficient amounts of charm and comic timing. **

GOOD LUCK CHUCK Upchuck would have been a more accurate title for this nauseating effort – not only does its mere existence instantly elevate the already high standing of such accomplished "raunchy comedies" as The 40-Year-Old Virgin and There's Something About Mary, it also makes them seem as refined as an Ernst Lubitsch farce from the 1930s by comparison. Dane Cook, whose popularity continues to elude me, plays Chuck, who was long ago placed under a hex which states that whenever he sleeps with a woman, she will then marry the next man who woos her. This allows Chuck to have sex with all sorts of buxom babes (and, in a couple of cruel sequences straight out of Norbit, obese ones as well) without worrying about commitment issues. But he grows tired of such a shallow lifestyle, especially after meeting Cam (the eternally vapid Jessica Alba), a klutzy penguin specialist he's afraid he'll eventually lose to the curse. The central premise is no more farfetched than those exhibited in such frothy comedies as 13 Going on 30 and Big, yet Good Luck Chuck forgoes quirky charm and endearing characters in order to focus on bottom-of-the-barrel gross-out gags involving sex with grapefruits, stuffed penguins and a woman with three breasts. Cook and Alba generate about as much chemistry as a mongoose paired with a rattlesnake, while Dan Fogler, as Chuck's foul-mouthed best friend, will likely endure as the movie year's most obnoxious sidekick. *