Enchanted, The Mist, No Country For Old Men, others 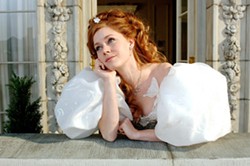 AMERICAN GANGSTER American Gangster is yet one more tale about a confident crime figure who rises to the top before taking that inevitable plunge down the elevator shaft. Yet for all its familiar trappings, director Ridley Scott and writer Steven Zaillian invest their tale with plenty of verve, even if they frequently soft-pedal the deeds of their real-life protagonist. Denzel Washington, perhaps our most charismatic actor, has been charged with bringing Frank Lucas to the screen, and, as expected, he turns the Harlem kingpin into a magnetic menace, a self-starter who becomes a millionaire by eliminating the middle man in the drug trade. American Gangster could easily have been called American Capitalist or American Dreamcatcher – it's a Horatio Alger tale shot up with heroin – but perhaps sensing that Lucas' fine qualities might likely overshadow the fact that he's selling death to his own people (only one sequence hammers home the horrors brought about by Lucas' exploits), Scott and Zaillian offer up a standard movie hero in Richie Roberts (Russell Crowe), the honest cop tasked with busting open the New York/Jersey drug racket. Roberts could have come across as a cardboard saint, but thanks to Crowe's deft underplaying, he's an interesting figure and strikes a nice counterbalance to the more dynamic Frank Lucas. American Gangster is long but not overlong – its 160 minutes are well spent – and while it never achieves the epic grandeur of, say, The Godfather (for one thing, the real-life denouement prohibits any Scarface-style theatrics), it manages to pump a measure of respect back into a genre that thrives on it. ***

AUGUST RUSH The sound of music comes alive in this charming family film that pushes the always-welcome message that the arts – in this case, music – can inform and enhance our lives, leading us to places we've never been and allowing us to establish meaningful contacts with other like-minded people. There's no denying that the movie, which often plays like Oliver Twist as conceived by the dance troupe Stomp, is sweet and heartfelt and full of passion. But there's also no denying that it's clunky, haphazard and not especially well-written or efficiently directed. If you've seen the trailer, which seems to go out of its way to reveal every important scene, then you already know that August Rush is the story of Evan Taylor (Freddie Highmore), an orphan whose parents – a cellist (Keri Russell) and a guitarist (Jonathan Rhys Meyers) – don't even know he exists (Mom was told by her controlling father that he died during childbirth). But young Evan is determined to find his parents, and he believes that through music they can be reunited; i.e. that they'll be able to magically hear him and locate him. Thus, he escapes from the orphanage, making his way to New York City and falling in with a band of street kids working for a Fagin-like musician-promoter (Robin Williams). That Williams' character turns out to be a controlling bully is one of the picture's few surprises; everything else falls neatly into place, thanks to a script that needs about 128 coincidences to retain its forward momentum. The best way to enjoy August Rush, then, is to accept it completely as a fantasy; applying any sense of realism to any of its scenes might cause one's head to explode. **1/2

BEE MOVIE The best thing about Bee Movie isn't even in the film. It's the jar of Ray Liotta Honey sent to members of the media, and there's something so surreal, so absurd, about seeing the GoodFella's mug on a food product that it tickled the fancy with promises of an animated feature that would follow suit. Unfortunately, Bee Movie is the same nondescript toon tale we've pretty much come to expect from any animated outlet not named Pixar. In this one, it's Jerry Seinfeld contributing the vocals to the central character, a bee (named Barry) who leaves the hive to explore the world outside. He finds a New York City full of sound and fury, but also one that contains a sweet florist named Vanessa (Renee Zellweger). Breaking the long-standing rule that bees must never talk to humans, Barry makes contact with Vanessa, and the two strike up an unorthodox friendship. But Barry freaks out once he spots the rows of honey lining supermarket shelves: The bees work hard to make that honey, and, feeling that his kind are being exploited, he ends up suing humankind. The appearance by Liotta (or, rather, his toon rendition) is a high point, certainly more clever than the cameos by Sting and the tiresome Larry King. In fact, Liotta outshines just about everyone, including dull Matthew Broderick as Barry's best friend. And while most animated features, even the bad ones, champion individuality, this flies in the opposite direction by rallying around the notions of conformity and subservience. Surely that's not what the filmmakers intended, but regardless, it kills the good buzz that the movie manages to generate in spurts. **