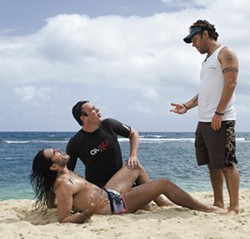 FLAWLESS At a time when banks are being bailed out by Bush's "for rich people only" government while ordinary citizens are left to flounder, perhaps it's possible to employ the current string of heist flicks as a mildly cathartic tonic. On the heels of Mad Money, The Bank Job and 21 comes Flawless, in which a pair of hard workers team up to rip off the evil diamond company that takes their services for granted. Set in 1960 London, the picture stars Demi Moore as Laura Quinn, a female executive who's repeatedly overlooked when it comes time to promote from within. Despite years of dedicated service (and more than her share of innovative ideas), Laura learns from Mr. Hobbs (Michael Caine), the company janitor whose lowly status allows him access to valuable info, that she's about to be fired. Appealing to her anger, Hobbs asks Laura to assist him in what he deems a foolproof robbery; she reluctantly accepts, only to eventually discover that the scheme is far more elaborate than she imagined. For the first hour, the film plays as we'd expect – the planning of the heist, the handling of unexpected complications, and the job itself. This part of the picture is entertaining enough, further fueled by the subtext of watching this ambitious woman try to compete in an all-male world determined to shut her out. But the picture really takes off during its second half, and even some lapses in logic can't overtake the satisfying plot twists. The modern-day framing device is worthless – it opens with Moore in terrible old-age makeup and concludes with a heavy-handed "Carpe Diem" cheer – but the period pic between these bookends is, if not worth its weight in gold (or diamonds), at least worth the price of a movie ticket. ***

FORGETTING SARAH MARSHALL Those afraid that the dismal Drillbit Taylor marked the beginning of the end for Hollywood wunderkind Judd Apatow can relax: Forgetting Sarah Marshall (on which he serves as producer) nearly matches the laugh output of Knocked Up and actually surpasses that of Superbad (though none can still touch The 40-Year-Old Virgin). Jason Segel (who also scripted) plays Peter Bretter, a nondescript guy who writes the music for the TV crime series starring his celebrity girlfriend, Sarah Marshall (Kristen Bell). After five years together, Sarah dumps Peter for self-centered and none-too-bright rock star Aldous Snow (Russell Brand), a rejection that sends Peter spiraling into self-pity. He flees to Hawaii to escape from it all, only to end up at the same hotel as Sarah and Aldous; it's only through the efforts of Rachel (Mila Kunis), the resort's desk clerk, that Peter's able to occasionally follow through on the title action. Apatow's films are hailed for successfully mixing raunchy moments with heartfelt ones, but their greatest strength might actually be the depth of their benches. Even the most minor characters are a joy to be around, and that's the case here as well, whether it's the brain-fried surf instructor (a very funny Paul Rudd) or the fawning waiter (Jonah Hill) or the newlywed (Jack McBrayer) who's freaked out by his wife's bedroom prowess (his indignation over the "playground" and the "sewer system" being placed so close together is priceless). As for the leads, Segel is an affable underdog, Bell displays some choice reaction shots, Kunis is talented enough to turn her role into more than just a Male Fantasy, and Brand – the MVP among strong competition – is spot-on as the British rocker who manages to turn vanity into an endearing character trait. ***

LEATHERHEADS Football may be a rough-and-tumble sport, but Leatherheads is handled by director and star George Clooney with all the delicacy one extends toward an antique vase. Working from a first-time script by sports writers Duncan Brantley and Rick Reilly, Clooney offers an occasionally wistful look at the early days of professional football, when its popularity was nil and it was viewed as college football's deformed and ignored stepbrother. The year is 1925, and realizing that the league is about to fold, veteran player Dodge Connolly (Clooney) convinces Carter "The Bullet" Rutherford (John Krasinski), the nation's most popular college football star, to put his studies on hold and join the pro ranks. With Carter – a beloved World War I hero, to boot – drawing in thousands of fans, the sport catches on, but working the sidelines is tough-talking reporter Lexie Littleton (Renee Zellweger), assigned to determine the authenticity of Carter's WWI exploits. As screenwriters, Brantley and Reilly are, not surprisingly, clearly more comfortable with the gridiron aspects of the story than with the ofttimes flat romance that never quiet manages to make itself at home within the film's structure. But ever the jokester, Clooney doesn't rely on his writers to come up with all the funny stuff. Leatherheads is full of visual sight gags, whether the humor derives from elaborate setups or merely from knowing when to repeat the same shot for maximum potency. Admittedly, the humor is as muted as most other aspects of this low-key production. But Clooney obviously sensed that such an approach suited this material, and why mess with a winning game plan? ***