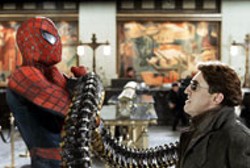 ANCHORMAN: THE LEGEND OF RON BURGUNDY Aimed squarely at the open-mouth-breathers who turned Dumb and Dumber and Big Daddy into hits, Anchorman is the movie as litmus test -- specifically, how much Will Ferrell is too much Will Ferrell? As a chauvinistic news anchor in 1970s San Diego, Ferrell gets to wear ugly clothes, make silly faces, and lust after the ladies, but unless you hold the opinion that the actor is a comic genius worthy of Chaplin or Tati comparisons, then this sort of obnoxious oafishness gets stale quickly. There are a handful of inspired moments, but these clever bits seem almost accidental in the midst of so much kitsch.

AROUND THE WORLD IN 80 DAYS Less an adaptation of Jules Verne's novel than a quasi-installment in the Shanghai Noon/Knights franchise, this expensively priced but cheaply realized action yarn finds Jackie Chan playing a martial arts expert who takes on all villains in an effort to return a jade Buddha statue back to his remote Chinese village. Stranded in London, he passes himself off as a French valet named Passepartout and hitches an intercontinental ride with inventor Phileas Fogg (Steve Coogan), who has bet that he can travel around... well, you know this part. Everything about this production seems tired, from Chan's fight routines to the soggy humor to the cameo by Arnold Schwarzenegger, looking rather ghastly as a lecherous Turkish prince sporting skimpy duds, a hideous wig and a jaundiced complexion.

BAADASSSSS! With Mario Van Peebles playing his own father, this tells the fascinating back story of how, back in 1971, Melvin Van Peebles turned down an offer to be the major studios' token black filmmaker in order to realize his goal of producing a raw, edgy work that spoke directly to Afro-American audiences. Sweet Sweetback's Baadasssss Song turned out to be a monster moneymaker, the first of the "blaxploitation" flicks, and an important stepping stone in the development of independent cinema, and this picture chronicles how the process of bringing it to the screen took a major toll on Melvin's health, family and finances. The movie is ultimately a son's affectionate tribute to his dad, an often difficult man who may have floundered as a regular father but established himself as a "founding father" of a different sort.

THE CLEARING No superheroes, no car crashes, no sword-swinging knights, no animated critters -- for older viewers not interested in the glamour and glitz of the summer season, The Clearing would appear to be the winning ticket. Unfortunately, there's also no urgency in the execution and no point to the resolution -- all in all, a major disappointment for those seeking cinematic sanctuary. At least this is fortunate to be blessed with a powerhouse cast: Robert Redford as a self-made millionaire who gets abducted, Helen Mirren as his wife, and Willem Dafoe as the kidnapper. Their performances remain riveting throughout, yet the story that contains them is flimsy, with hints of psychological complexity being scuttled as this meandering movie heads for a conclusion that's meant to be devastating but instead proves desultory.

DODGEBALL: A TRUE UNDERDOG STORY For devotees of dum-dum cinema, here's Dodgeball to placate the lowest common denominator while also allowing discerning filmgoers to slum in style. Oh, sure, writer-director Rawson Marshall Thurber didn't have to look further than his weather-beaten VHS copy of Animal House for inspiration, and some of the jokes not only thud to the ground but then spend a few uncomfortable seconds writhing in agony. But when it has its game face on, this offers a satisfying number of laughs, characters that we care to follow, and cameo appearances that (in contrast to those in Around the World In 80 Days) are positively inspired. At a time when many ambitious studio films are aiming high and falling short, here's one that delivers on its low-pressure promise.

FAHRENHEIT 9/11 Let's be honest: For better or worse, this will be viewed as a propaganda tool first and a motion picture second, and those with strongly held political views won't be swayed one way or the other by Michael Moore's filmic diatribe against the Bush family (it's Moore's hope that the "undecideds" who brave the film will theoretically end up handing the election to Kerry). But is it worth seeing? Certainly -- and not even so much because of its politics, but because of its compassion. As is often the case with Moore, the movie works best when he removes himself from the equation and lets his subjects hang themselves through existing news footage. Still, for all its political pelting, this is at its most gripping when it simply focuses on the innocent people whose lives have been destroyed either by the heinous terrorists or by the abhorrent policies of this administration.