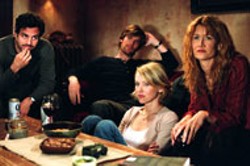 DODGEBALL: A TRUE UNDERDOG STORY For devotees of dum-dum cinema, here's Dodgeball to placate the lowest common denominator while also allowing discerning filmgoers to slum in style. Oh, sure, writer-director Rawson Marshall Thurber didn't have to look further than his weather-beaten VHS copy of Animal House for inspiration, and some of the jokes not only thud to the ground but then spend a few uncomfortable seconds writhing in agony. But when it has its game face on, this offers a satisfying number of laughs, characters that we care to follow, and cameo appearances that are positively inspired. At a time when many ambitious studio films are aiming high and falling short, here's one that delivers on its low-pressure promise.

GARDEN STATE With his first endeavor as writer-director-star, actor Zach Braff (TV's Scrubs) does more than knock it out of the park -- this one reaches all the way to the county line. Braff plays Andrew "Large" Largeman, a struggling LA actor who returns to his New Jersey hometown to attend his mother's funeral. While in town, Large hooks up with his old high school acquaintances, yet his most significant relationship turns out to be with someone new to his circle: Sam (Natalie Portman), a vibrant life force who's the perfect remedy for an emotionally bottled-up guy trying to make some sense out of his muddied existence. Braff drastically switches gears from providing laughs to imparting poignant life lessons; it's a gamble that pays off, resulting in a film that gives our emotions a vigorous workout. The performances are uniformly fine, with Portman nothing short of sensational.

HERO A 2002 Oscar nominee for Best Foreign Language Film, this Chinese epic should satisfy anyone who couldn't get enough of the visual splendors exhibited in Ang Lee's Crouching Tiger, Hidden Dragon. Zhang Yimou (Raise the Red Lantern) has assembled an all-star cast for this opulent tale centering on a warrior (Jet Li) who claims to have single-handedly vanquished the legendary assassins Broken Sword (Tony Leung), Flying Snow (Maggie Cheung) and Sky (Donnie Yen). Yet is the hero telling the truth, or are there some Rashomon dynamics at play here? The performers punch across the importance of the story's themes of solidarity and self-sacrifice, and the different color schemes employed throughout are breathtaking -- it's unlikely that many other movies this year will match this one's ravishing visuals.

MARIA FULL OF GRACE A different kind of drug movie -- one that dives straight into the trenches -- this one isn't about the cops, the kingpins or the clients; instead, it focuses on the mules, the (usually) impoverished folks who agree to smuggle the contraband material across borders, risking arrest or even death along the way. Newcomer Catalina Sandeno Moreno delivers a memorable performance as the 17-year-old Colombian girl who agrees to swallow dozens of heroin pellets and deliver them to a pair of pushers in New York City. Maria Full of Grace is an eye-opening experience that sidesteps any political or moral rhetoric in an effort to paint a grim portrait of an independent woman who's neither saint nor sinner, but merely a working stiff whose ill-advised decisions never subjugate her humanity.

OPEN WATER Forget all those vague, attention-grabbing warnings from the White House about Al-Qaeda operatives in our midst: For a true Terror Alert, look no further than the auditorium housing Open Water. Shot in a grainy, you-are-there style reminiscent of The Blair Witch Project, this compact thriller centers on two vacationers (Blanchard Ryan and Daniel Travis) who find themselves stranded in the ocean after a scuba-diving excursion goes awry. The lack of inevitability -- will they be rescued in time, or end up as shark entrees? -- makes the picture such an uneasy watch, with writer-director-editor Chris Kentis effectively stripping away all the protections of the modern world until nothing is left except two individuals stranded in the middle of a beautiful yet deadly expanse that neither seeks nor provides favors.

VANITY FAIR A condensation -- and softening -- of William Makepeace Thackeray's novel, this finds Mira Nair (director of the wonderful Monsoon Wedding) filtering the tale through her own sensibilities. Yet her liberties don't cripple the piece -- more often, they provide a welcome sheen to a movie that often threatens to buckle under the weight of so many characters and plot strands. Although the script's episodic nature sometimes gets in the way of narrative propulsion, the lively characters -- and the hypocrisies they inadvertently champion -- always remain watchable. As the poor but plucky Becky Sharp, the 19th century social climber determined to carve out a better life for herself, Reese Witherspoon makes a perky protagonist, though her character needs a nastier edge to be truly believable.