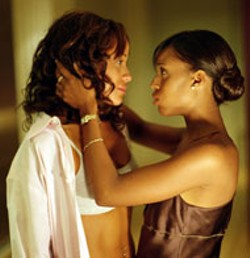 CELLULAR After being kidnapped for reasons unbeknownst to her, a biology teacher (Kim Basinger) is able to jerry-rig a busted telephone so that it's able to make one random call. She ends up dialing the cell phone number of buff beachgoer Ryan (Chris Evans), an aimless kid who, after an initial bout of skepticism, believes her pleas for help. After a failed attempt to notify the authorities, Ryan decides he's the woman's only hope, though a conscientious police officer (William H. Macy) soon realizes something's up and begins his own investigation. Replace that newfangled contraption the cell phone with an old rotary telephone, and this basic plotline would have been perfect for a vintage episode of, say, McCloud or Harry-O; indeed, a 60-minute prime-time slot would have been more beneficial than this movie's 95 minutes. Yet even if it overstays its welcome, Cellular turns out to be a nifty thriller buoyed by solid performances and catchy riffs of humor. Scripter Larry Cohen (who also penned Phone Booth) and director David R. Ellis both employ a full-speed-ahead approach that suits the material at hand, even if it never quite conceals the sheer improbability of the piece.

SHE HATE ME While in theory it would appear impossible to confuse an ambitious Spike Lee production with an inferior Look Who's Talking sequel, the inclusion of several scenes in which animated sperm all bearing the visage of the leading character race toward their final destination indicate that all bets are off as far as She Hate Me is concerned. Arguably Lee's worst film to date, it's a melting pot of ideas that have obviously been swimming around inside the filmmaker's noggin. But rather than logically split them up into separate movies, Lee and co-scripter Michael Genet simply ejaculate them all over the screen, leaving a mess that few will want to wade through. After an opening shot of a three-dollar bill graced by George W. Bush's mug and emblazoned with the Enron logo, the movie centers on Jack Armstrong (Anthony Mackie), an executive at a shady biotech company who's fired after turning whistleblower. Fortunately for the cash-strapped Jack, his former girlfriend (Kerry Washington), now a lesbian, shows up and offers him $20,000 to impregnate both her and her lover (Dania Ramirez); before long, he's knocking up close to two dozen lesbians at $10,000 a bonk. The notion that all these women -- without exception -- are physically and emotionally satisfied by their heterosexual trysts with Jack would have played well at the recent Republican National Convention, but we're not through yet: Lee also includes half-assed bits involving Watergate, AIDS, Michael Jordan's semen and Grace Kelly's ovaries (don't ask), the Mob (repped by John Turturro), cartoonish Senate hearings, and plenty of softcore humping that indicates Spike's been watching too much late-night HBO.

SKY CAPTAIN AND THE WORLD OF TOMORROW A large-scale achievement that manages to simultaneously seem retro and futuristic, Sky Captain features cutting-edge technology in the service of a storyline that harkens back to the days of Flash Gordon and Buck Rogers. While the actors are flesh-and-blood -- or, in the case of Angelina Jolie, fleshy-and-bloody-hot -- practically everything around them was created on computers by debuting writer-director Kerry Conran and his team. Beyond smacking of gimmickry, this will provide ample fodder for those decrying the continuing dehumanization of Hollywood movies; still, there's no getting around the fact that the end result is a visual marvel, the obvious work of someone deeply immersed in both cinematic and sci-fi lore (indeed, a repeat viewing seems like a requisite). I wish that Conran's script (and his attendant direction) exhibited a bit more pizzazz, but it's serviceable enough, with heroic aviator Sky Captain (Jude Law) and spunky reporter Polly Perkins (Gwyneth Paltrow) trying to unravel a mystery whose ingredients include the disappearance of prominent scientists, the destruction of New York City by gigantic robots, and the emergence of a mysterious figure known as Dr. Totenkopf (the long-gone Sir Laurence Olivier, resurrected through altered footage from his early movies). From German Expressionism to screwball comedy, from The Wizard of Oz to Raiders of the Lost Ark, Conran's influences often make Sky Captain seem like the fever dream of a hopeless film buff -- it may be derivative, but it's never dull. Jolie's character, feisty fighter Franky Cook, holds promise, but unfortunately she's only in the movie for 15 minutes, tops.

COLLATERAL The notion of matinee idol Tom Cruise playing a hardened assassin may sound like a gimmick, but his performance in director Michael Mann's drama is a fine one, nicely seasoned with just the right touch of piquantness. Sporting salt-and-pepper hair that suits him well, Cruise stars as Vincent, a contract killer who forces a cab driver named Max (solid Jamie Foxx) to ferry him around nocturnal Los Angeles so he can carry out his hits. Scripter Stuart Beattie creates some interesting give-and-take dynamics between Vincent and Max, yet he and Mann (Heat) seem to be equally interested in the peripheral elements, a decision which gives the film added resonance.