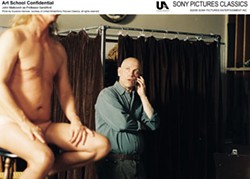 ART SCHOOL CONFIDENTIAL Jerome Platz (Max Minghella), a freshman at the Strathmore art school, has two ambitions in life: to become the greatest artist in the world and to get laid. That one objective never seems to take precedence over the other makes sense. After all, what college student can truly contemplate the Big Picture when immediate approval and gratification might be within grasp? Art School Confidential, from the Ghost World team of director Terry Zwigoff and writer Daniel Clowes, starts out as a great movie that eventually devolves into a pretty good one, as a stinging expose of campus life gives way to the more rigid narrative demands of a police procedural. Somehow managing to be even more cynical than the pair's previous works, the movie follows Jerome as he discovers that it's almost impossible to become a master practitioner of his craft when his teachers turn out to be hypocrites (John Malkovich is aces as one of these pretentious profs) and his fellow students produce amateurish works that are instantly hailed as cutting-edge. He finds his muse in an artist's model (Sophia Myles) who, naturally enough, gravitates toward the hunkiest student (Matt Keeslar) in the class, and he ends up absorbing dubious life lessons from a decrepit alumnus (Jim Broadbent) who has long been resigned to a life of anonymity and alcohol. Burdened with so much disillusionment, it's no wonder that Jerome devotes little thought to the fact that a serial killer is trolling the campus grounds. Adapted from Clowes' comic story, Art School Confidential works best when it expertly taps into the uncertainties of an adolescent existence suddenly liberated from the confines of home and family, or when it deconstructs the notion of what truly constitutes being a success or, conversely, a failure in one's chosen field. It's at its weakest when it clumsily tries to tie together its points by employing a sensationalistic device that detracts from its astute observations. ***

AKEELAH AND THE BEE The pattern holds that every decade's midway stretch gives us an underdog worth supporting. In the 1970s, it was Rocky, in the 1980s, it was the Karate Kid, and in the 1990s, it was Babe. And now here comes 11-year-old Akeelah to carry the torch for the little people. Akeelah and the Bee, which in addition to its underdog roots also manages to come across as a mesh between the documentary Spellbound and Boyz N the Hood refitted with a happy ending, centers on Akeelah Anderson (Keke Palmer), a south LA girl who, with the help of her mentor (Laurence Fishburne), works her way through the national spelling bee circuit. What sets the film apart is the manner in which it details how Akeelah's triumphs end up lifting the entire community: Her success is their success, and it's truly inspiring to watch neighbors from all walks of life throw their support behind her. There's no need to hide that lump in your throat or tear in your eye -- this movie earns its sentiment. ***

AMERICAN DREAMZ The decline of the American empire -- or at least the dumbing down of its populace -- began in earnest some time ago, but it has clearly reached its zenith with the twin threat of the Bush presidency and reality TV. Both, of course, are obvious targets for satire, but it's hard to mock something that in itself is already a mockery of sorts. Writer-director Paul Weitz nevertheless takes a stab with this comedy that ties together a moronic talent show hosted by a callow Brit (Hugh Grant) and a clueless US prez (Dennis Quaid) unable to think for himself. American Dreamz is a crushing disappointment, a weak-willed, ill-conceived film with a scarcity of laughs and a maddening tendency to let its subjects off with a slap on the wrist rather than go for the jugular. Lacking the lockjaw clench of a Dr. Strangelove or a Network, it's content to offer toothless stereotypes and defanged targets. This isn't a black comedy -- it's more like a whiter shade of pale. **

FRIENDS WITH MONEY Movies like Friends With Money can often be termed "slice of life" films, but when they're as tasty as this one, a slice won't suffice: We end up longing for the whole pie. Set in LA, this rich seriocomic gem centers on the daily activities of four close female friends. Three of them indeed have money: screenwriter Christine (Catherine Keener), clothing designer Jane (Frances McDormand) and stay-at-home mom Franny (Joan Cusack). The friend without money is Olivia, whose lifestyle forces the others to reflect upon their own circumstances. I greatly enjoyed writer-director Nicole Holofcener's previous two pictures, 1996's Walking and Talking and 2002's Lovely & Amazing, but this might be her most accomplished work yet. Her greatest strength as a writer rests not in her dialogue (though it's top-grade) but rather in the manner in which she proves to be enormously generous of spirit with all her characters. ***1/2

HARD CANDY Moviegoers will exhaust themselves trying to determine whether this is an exploitation flick, a feminist empowerment drama or a particularly feisty coming-of-age yarn with a diabolical twist. It immediately puts the audience at unease by exploring the burgeoning relationship between 32-year-old Jeff (Patrick Wilson) and 14-year-old Hayley (Ellen Page). But just as we fear that Hayley will become another victim of an Internet predator, the tables are turned in dramatic fashion, with Jeff's luscious Lolita morphing into an avenging angel. Wilson is excellent, yet the real discovery is Page, who never shies away from the implication that Hayley might be deeply disturbed by her own set of demons. Eventually, we realize that Hard Candy isn't necessarily a movie about lost innocence. In a modern world ruled by technology that allows 14-year-old girls and 32-year-old men to easily hook up, it's possible that this innocence never had a chance to flourish in the first place. ***

LUCKY NUMBER SLEVIN The latest hollow exercise in hipster chic is the sort of convoluted, twist-packed yarn that strains to be unpredictable but is actually even easier to figure out than those Jumble puzzles that appear in the dailies. Josh Hartnett, cinema's favorite lightweight, plays Slevin, a seemingly guileless guy who finds himself caught in a power struggle between two rival crime lords (Morgan Freeman and Ben Kingsley). Bruce Willis is on hand as, natch, the taciturn hitman who turns out to be more involved than he initially appears. Hartnett would seem hard-pressed to carry a basket of laundry, let alone carry a motion picture, while the three reliable vets seem almost bored trying to keep up with the plot's changes of direction. The movie's saving grace is Lucy Liu: Cast as a chatty neighbor who helps Slevin piece together the mystery, she's a breath of fresh air in a genre that too often suffocates on its own fumes of pungent testosterone. **

RV One would have to travel deep into the 1990s to locate a comedic Robin Williams performance that was more than simply incessant shtick. Thankfully, RV finds Williams again merging his patented humor with a recognizably human character -- it's just a shame that the vehicle that carries this engaging performance doesn't offer a smoother ride. The tug-of-war between career and home is too omniscient to ever be ignored by filmmakers looking for an easy angle, and for a while, RV, in which a workaholic takes his family on vacation in the title monstrosity, looks as if it's going to be an effective take on the matter. Instead, the movie reveals an obsession with labored slapstick and potty humor, meaning we get tiresome scenes in which Williams' character falls down hills or finds himself covered head-to-toe in fecal matter. By the end, the crudity is so excessive, it makes National Lampoon's Vacation look as sophisticated as The Accidental Tourist by comparison. **

THE SENTINEL Michael Douglas plays Harrison Ford and Kiefer Sutherland costars as Tommy Lee Jones in The Sentinel, the latest thriller that tries to put one over on the audience but ends up only fooling itself. Yet while it's clearly no match for The Fugitive, this "innocent man on the lam" yarn gets some mileage (well, yardage) out of a fairly taut first act and an appropriately constipated Michael Douglas performance. Douglas is cast as Pete Garrison, a career Secret Service agent ballsy enough to carry on an affair with the first lady (Kim Basinger). But evidence soon surfaces that an inside man is helping a foreign outfit plot to assassinate the President (David Rasche), and agent David Breckinridge (Sutherland) becomes convinced that Garrison, his former mentor, is the traitors. Director Clark Johnson doubtless planned to deliver a hand-wringing thriller filled with unexpected twists and turns, but when the results are this obvious, even good intentions can find themselves caught in the line of fire. **

THANK YOU FOR SMOKING The so-called "culture of spin" gets taken for its own spin in this lacerating adaptation of Christopher Buckley's 1994 novel. Even with a too-brief running time of 92 minutes, the movie manages to pack in all manner of material both saucy and dicey, yet when the smoke clears, what's most visible is the emergence of Aaron Eckhart as a major talent. He's terrific as Nick Naylor, who excels as chief spokesman for the tobacco industry even though he realizes he's despised by a significant part of the population. Nick earns the admiration of Big Tobacco's Big Daddy (Robert Duvall), but he has his hands full bonding with his own son (Cameron Bright), who adores his dad but often asks tough questions about his profession. Writer-director Jason Reitman keeps the laughs flying during the first half, then slows down enough to lay the groundwork for a satisfying conclusion. ***1/2

UNITED 93 It's hard to imagine a less sensationalized 9/11 film than writer-director Paul Greengrass' superb docudrama focusing on the morning when all hell broke loose in the US -- and specifically zooming in on the tragic yet inspiring saga of the one hijacked plane which did not reach its intended target. Perhaps it was imperative that an outsider tell this story, and that's what we get with Greengrass. A British filmmaker who achieved similar verisimilitude with 2002's Bloody Sunday (about the 1972 massacre of Irish civilians by English troops), Greengrass repeatedly refuses to take the bait of making a picture that can be tagged as exploitive, propagandistic or too political. Yet his restraint can only shelter us for so long: Ultimately, there's no defense against our own humanity. I imagine it's impossible to watch United 93 and not be brought to tears on several occasions. Whether such an outpouring of emotion will help the healing or tear open old wounds -- well, that's for each man and woman to decide for themselves. ****

THE WILD Comparisons to the fine Madagascar aren't necessary to point out the myriad shortcomings of The Wild, which manages to be abysmal on its own terms. Fast-paced is one thing -- Bugs Bunny and crew all but turned it into an art form -- but this ADD-affected movie seems to have been made by mentally stunted adults after they've popped a dozen uppers and downed two dozen cups of coffee. The CGI animation is impressively lifelike, though it begs the recurring question as to why we would want our animated movies to not look like animated movies. Everything else about this toxic toon is intolerable, especially the sidekicks who accompany Samson the lion (voiced by Kiefer Sutherland) as he leaves the comforts of the New York zoo to search for his wayward son in a faraway jungle. Nigel the koala (Eddie Izzard) rates a special mention, emerging as the most loathsome animated character since Martin Short's insufferable robot B.E.N. in Treasure Planet. *