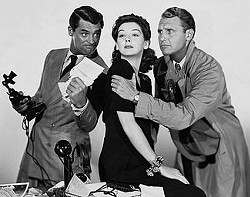 When: Sat., Jan. 14, 3 p.m. 2012
Price: Free
The Main Library's Extra! Extra!: Celebrating the Newspaper Picture film series continues this week with a screening of 1940's His Girl Friday. The comedy stars Cary Grant as an editor who wants to break more than just the news. After hearing of his reporter ex-wife's (Rosalind Russell) decision to settle down with an insurance man (Ralph Bellamy), he devises a plan to end the unadventurous relationship by sending her to sniff out a big story.
— Anita Overcash