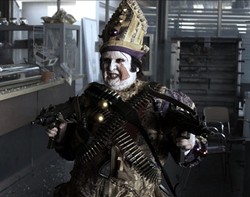 When: Thu., Jan. 12, 7:30 p.m. 2012
Price: $8
Following a successful launch this past fall, the Back Alley Film Series rings in the new year with several more out-there titles that aren’t likely to enjoy regular runs at Charlotte theaters. First up is The Last Circus, a Spanish import that offers more than its fair share of arresting visuals and demented scenarios. Often playing like a mishmash of Federico Fellini and Guillermo del Toro, the movie, set in end-of-Franco-era Spain, centers on portly Javier (Carlos Areces), who lands a job as the Sad Clown at a squalid circus. There, he falls for the beautiful trapeze artist Natalia (Carolina Bang) while running afoul of her sadistic boyfriend Sergio (Antonio de la Torre), who not only operates the circus but also performs as the Happy Clown. Upcoming BAFS titles include the Brazilian thriller Elite Squad: The Enemy Within and the supernatural yarn The Innkeepers.
— Matt Brunson