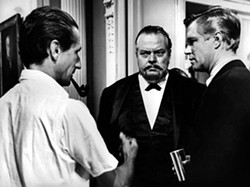 When: Sun., Dec. 8, 7 p.m. 2013
Phone: 704-353-9200
Email: info@bchtler.org
Price: $4.00
An American writer attempts to uncover French political dealings with an underground fascist organization. The movie’s plot parallels a political upheaval that rocked France in May of 1968. Never commercially released in the USA, this will be the first time House of Cards has been shown in Charlotte since 1968. Presented as part of the Bechtler's series 'Films of 1968: Style, Revolution and The Future.'