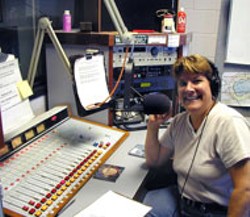 Some members of the current station staff have said they are afraid of Linda Osbon, claiming to have seen her foam at the mouth and forced to be physically restrained from attacking them at a public meeting. She laughs as she denies accusations she has clearly heard many times before, but there is hurt in her eyes for a fleeting moment before she resumes her rapid-fire indictment of certain WNCW staff members.

The role Osbon has played in the ongoing controversy at WNCW becomes obvious during a visit to her home. She moves easily among cartons of news clippings, documents, videotapes and audio recordings that cover every facet of WNCW history.

"People say I'm obsessed with that radio station," she says. "They're right. As a volunteer and employee at WNCW for so many years, I hate to see how it has been abused."

Over the past four years, the trio of Osbon, Bill Bost and his brother Ted have devoted much time to the WNCW affair, leading some remaining station insiders to brand them the Hickory Taliban. In fact, at first glance (and second and third glance, if truth be told), it sometimes appeared that Bost, Bost and Osbon stood alone as WNCW critics. Upon further investigation, others with ties to the radio station's past, like former station Community Advisory Board member Danielle Withrow, emerged to second much of what Osbon and the Bosts were saying.

Withrow laments the lost opportunity to end much of the conflict after the FCC ruling. "What [station management] could have done that they did not do was say, "We made a mistake and will correct it,'" she says. "They never apologized. They just circled the wagons."

Michelle Smith is a North Carolina native who attended college at UNC-Asheville. A literature major who spent a couple of years in Atlanta after graduation, she moved back to Asheville in part because of WNCW.

"I first heard the station shortly after they signed on the air," she says. "I started working there as a volunteer in "92. It's not just that I love WNCW, but I'm dedicated to WNCW as an important cultural institution for Western North Carolina."

Smith became the manager of member services in 1999 and a key member of the paid staff when Mark Keefe's efforts as program director were bringing the station national attention. She attributes much of the ongoing trouble at WNCW to the inability of Isothermal Community College to deal with a complex media organization.

"ICC is good at what they do -- running a college," she says. "But they are bad at running a radio station." Smith believes the PreserveWNCW group should take over the station's license. "My hope is ICC would give or sell the license to that group," she says. "Let a non-profit community organization be formed just for that purpose."

In one sense, Michelle Smith and Linda Osbon represent opposite sides of the same coin. Both are impassioned about WNCW, but Smith strongly believes the actions of Osbon and the Bosts have been detrimental to the station.

"No one at WNCW objects to scrutiny," she says, addressing the oft-heard complaint that station management preferred to operate in secret. "There were always and still are many ways to communicate with WNCW. Sometimes we didn't do what a particular constituent preferred, but that doesn't mean we weren't listening to our constituency. Everyone -- with the exception of some of those people who are no longer there, thank heavens -- at WNCW, including Mark Keefe, always acted in good faith toward our listeners and toward the radio station."

There is a natural tension between the duty of a public organization to be transparent in its operations, and its mandate to get things done in an expeditious manner while remaining accountable. Depending on your point of view, the operation of WNCW since that 16-page letter was delivered to the ICC president has either been a courageous effort to succeed under trying circumstances or an ongoing cover-up that continues to conceal basic details about the affairs of a public institution.

"The pity is that the current staff of the most talented and dedicated people with whom it's ever been my pleasure to work can't simply do their jobs," says Smith. "They have to work under constant threats." She describes Bost and Osbon showing up at WNCW with video cameras running, demanding to inspect public records. Other actions of the so-called Hickory Taliban included submitting requests for all of WNCW's internal e-mail traffic for a specified period of time.