Food fight at the captain's table

Plus, doing it at Theatre Charlotte 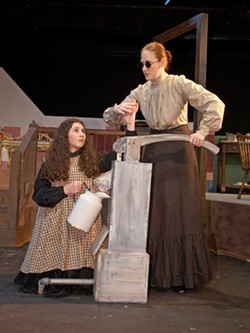 Charlotte Rep may have scorched the earth and prevented the regeneration of a regional professional theater company in the Q.C. for decades to come, but a chestnut like William Gibson's The Miracle Worker is not so easily defoliated. Five years ago, Rep staffers -- those who had replaced the company's founders -- were in a tizzy: Their new production of The Miracle Worker was on the road to Broadway.

As we know, Rep's hubristic Broadway intoxication led to its breathtaking downfall. But that big-budget Miracle, bankrolled by the Weisslers (of Chicago fame) and starring Hollywood luminary Hilary Swank, certainly left some big shoes to fill -- and one awesome set by Lez Brotherston -- even though it never reached the Great White Way.

So let's at least give CPCC Theatre credit for being the first to pick up the gauntlet and restaging the classic Annie Sullivan vs. Helen Keller food fights. Alas, the best Charlotte acting talent hasn't rallied 'round the cause, and panoramic Pease Auditorium -- mercifully targeted for imminent renovations and upfittings -- remains a poor match for Gibson's scenic demands.

Set designer James Duke struggles valiantly to create three levels at the pancake house on Elizabeth. From the level of the garden cottage, where Helen learns her alphabet and table etiquette, and the iconic water pump, where the deaf blind child finally cracks open the riddle of language, there's a flight of steps leading up to the Kellers' kitchen/dining room, the epic mashed potato battleground. Another staircase leads up from there to Helen's room, where Annie gives -- and gets -- her first lesson.

It's at this point, when Helen has locked Annie in her room and hidden the key, that Captain Keller calls upon son James to fetch a ladder so he can rescue the hired teacher from her humiliating imprisonment. Captain K might as well have called for a stepstool at this dwarfish dwelling.

You can also downsize expectations when Annie and Helen have their first smack-down up in yonder bedroom. Tony Wright is a capable fight choreographer, but he needs space to work. Wait awhile longer, when the battlefront shifts downstairs to the Captain's dinner table, and Wright's handiwork will be more impressive.

Co-directors Corlis Hayes and Corey Mitchell are also vanquished by that postage-stamp bedroom, unable to maneuver three people there at the same time without their appearing squeezed into a closet. Yet they do wonders with a large cast that has only a scattering of familiar names.

Amanda Berkowitz is the new name you're most likely to be hearing about after her exploits as Helen -- a far more grueling workout than her notable cameo last fall in CL's Show of the Year, The Pillowman. We've been very lucky in the Helens we've had in the Metrolina region since 1989. If Berkowitz's untamed meanness and rage don't equal the best, her energy and physicality are as credible -- and compelling -- as anyone's.

Of course, Courtney Wright has demonstrated that she has physicality to burn on numerous past occasions, perhaps most notoriously in those Actor's Gym action space operas, Alpha and Omega, in 2003 and 2004. Wright has steadily improved her acting skills since then, and her athleticism serves her well as Annie when she's called upon to manhandle Helen without sacrificing her purblind femininity.

It's her verbal forcefulness that really needs a boost. OK, an Anne Bancroft majesty shouldn't be expected from an inexperienced 20-year-old teacher. We do need a core of Yankee toughness that hardens into fierce defiance in the face of all the Kellers' resistance and interference.

In the heat of that unforgettable dining room denouement, I missed some of the angry words Annie -- and James -- hurled in the Captain's teeth. Simple reason: They weren't shouting. Just what could they be saving it for that late in the evening?

Joshua Looney, not at the top of his game as James, was a notch underpowered all evening long. The power shortage for Mark Plant as the Captain was more conspicuous, although he sometimes managed a relaxed avuncular charm, and Samantha Driver was very promising as Helen's mother, Kate. The deadliness of a couple scenes with Plant and Driver could be exorcised with quicker cue pickup.

All this might sound catastrophic until you recall the durability of this 1959 script -- 1957, if we go back to its TV genesis. On Saturday night, reactions from both young and old in the audience testified to how well The Miracle Worker still pushes those emotional buttons a half century later.

After scheduling conflicts prohibited my attending the first two installments of Vito Abate's just do it at Theatre Charlotte, I finally caught up with the series last Friday night. Glad I did. You get a program with titles of the performance pieces (there were a dozen on the evening's "Judgment Night" theme), 3-5 lines about the authors, and an intro/welcome from Abate. Then the show just rolls in front of whatever happens on the Queens Road stage that night. Right now, that would be the set for Little Shop of Horrors.

I found some engaging recurring segments on the program, including Jorja Ursin's zany collaboration with Hank West, "Jorja (On My Mind)," and Vito's topical hookup with Shon Wilson, "Word for Word." Fresh items on the menu varied wildly in flavor and quality, part of the excitement if you appreciate how difficult it is to hatch fine new theater. Best (meaning really good) were Marla Brown's absurdist "Dinner With God" and Meg Wood's "Mergers and Acquisitions" monologue.