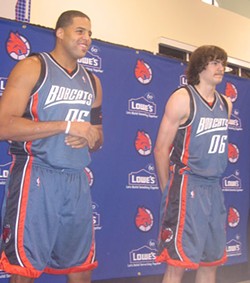 Ever notice how sports bars monopolize the local nightlife scene? They're everywhere: uptown, downtown, and around town, protruding to the University Area, Ballantyne, the Lake, and Concord.

The plethora of sports bars plays a significant role in Charlotte's sport culture. They serve as a venue to watch away games -- or home games if you don't have tickets. It's where my girls and I congregate to follow our girls only fantasy football league.

Actually going to the game has the sports bar feel, but with the bonus of seeing the show live. Because whether you're at the stadium, the arena, Stool Pigeons, or Picasso's (formerly Angry Ale's), there is, or should be, some form of tailgating going on. Tailgating is a sport for the spectator. Spectating and drinking go together like coaches and plays.

Root Root Root for the home team Thirsty Thursday at Knights Stadium provides a nostalgic feeling of a hometown county league, yet gives the excitement of an MLB ballpark with discounted beers. Unfortunately, there are no more Thirsty Thursdays left this season. Unlike in the traditional seventh inning stretch song, I did care if I ever got back, from the quaint field of dreams located just across the state line in Fort Mill, SC; I had a fashion show to go to ... at the arena.

Something new, something blue. Fashion took center stage at the Bobcats Arena last week when Sean May and rookie Adam Morrison modeled the team's new, blue uniform, which will make its regular season debut on Nov. 18 in Orlando. Don't worry, May and Morrison said they're sticking with basketball. Role models, perhaps. Fashion models? Not so much.

Are you ready for some football? I certainly am! Packing for a football tailgate is like packing for camping. You need a table for food (and/or beer pong), a jam box, multiple coolers, a grill, enough food to feed a family at Thanksgiving and a "baggo" board. On any given game day, random parking and grass lots are party central. It's all you'll see within a five-mile radius of the stadium (obviously, with the exception of highway 77).

But the ultimate tailgate is called just that: The Ultimate Tailgate Party, located in West Park. Unfortunately, the schedule has the Panthers play most their games in the early afternoon, which takes the nightlife out of tailgating. You're just going to have to set your alarm for earlier because the tailgating will go on.

Girls just wanna have fun, and fun they have with their strictly 1980s theme. Break out the crimpers, veils, and "the butt" dance at the Breakfast Club where everyone is dancing and singing along to old school beats. And by everyone I mean bachelorettes, guys looking to dance with the bachelorettes and older couples partying like they did when the songs being played were top-40 hits.

But luckily wedding season is coming to an end and football season has commenced. "Cause nothing could be finer than to be in Carolina for a Panthers' football game..."

Psssstttt ... If you have any dirt or inside scoop on nightlife, shoot me an e-mail at brittney.cason@creativeloafing.com.