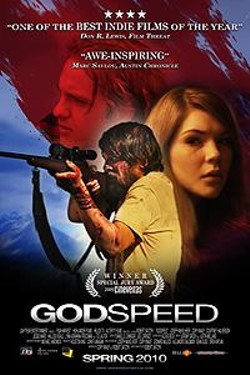 Charlie Shepard is a modern day faith healer, whose family is brutally murdered by unknown assailants for seemingly no reason whatsoever. Greif-stricken, Charlie abandons his former life and the house his family lived in, moving through the days' slow existence more like a ghost than a man. Then, a young, mysterious girl named Sarah appears in town and seeks out Charlie, pleading for help with her own grief-stricken father after her mother's death. It's here on Charlie's journey to Sarah's remote home, buried deep in the Alaskan wilderness, where he must eventually confront Sarah's troubled brother Luke -- a dark journey that will ultimately reveal the truth of his family's killings and lead to tragic, violent consequences for all.

Godspeed is not showing in any theaters in the area.