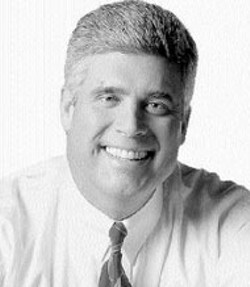 I hadn't heard the news yet, so when I came home that morning and found some strange answering machine messages, I knew something was up. I never thought it would be so soon.Much has been said and written in the days since WBTV anchor Bob Knowles' death last week at age 42. His story had become quite familiar to Charlotte, a touching tale of his matter-of-fact handling of a rare cancer that first took his eye and, eventually, his life. Self-assured and with enough reporting swagger for two people, the idea that he was fighting cancer was hard to believe for people who watched him on television. Tan, energetic, and even a bit dashing, the cancer didn't fit. Too young. Too much life ahead of him.

My take is a bit more personal when it comes to Bob, and writing this isn't easy. He was a former colleague, and finally, a friend. I hired Bob in 1995, bringing him from WCSC-TV in Charleston, SC, to WBTV. He'd been in touch, and I'd seen his resume tape, and was particularly impressed with a series he'd done on militia organizations in South Carolina. During the job interview, he was everything a news director looks for in a reporter: aggressive, ambitious, and good-looking. After all, it was TV news.

His first big splash was as part of the team coverage of the Susan Smith trial. Bob had just started at the station and barely knew where the men's room was when he stepped in a hole and tore a hamstring. He soldiered on, despite the crutches.

I think about his wicked sense of humor, his love of baseball, and his passion for the Rolling Stones. He was the kind of guy you wanted at your party, especially to chat with in the corner, whether about politics, or why those red-light cameras were a taxpayer rip-off. He liked to take on stories that challenged the status quo and questioned authority.

I thought he had the makings of someone who could move up the ladder, on to the networks and bigger fame. Could he have been David Bloom on that tank? I thought so. But then the cancer came.

While newsrooms do pull together, taking this kind of loss is very hard. It's the same as when you work for a bank, a store, or a plant where members of a team, division or shift get to know one another over many hours together on the job. You share those grocery store sheet cakes for birthdays and anniversaries. You put together a food chain to feed someone's family when there's an illness. You send a potted plant when a co-worker's grandmother dies.

Nowhere is this truer than WBTV, which has gone though more than its share of sadness. Longtime operations manager Ron Harrington, anchor C.J. Underwood, and now Bob, fought the good fight against various forms of cancer, often bringing their stories to viewers. Bob had no qualms about showing his prosthetic eye on the air as he was being fitted for it. He hoped that people would learn about his particular illness, which was very rare. I could only imagine how losing an eye was to that self-image that you just happen to throw out there on live television before thousands of people each night. If it bothered Bob, it bothered him privately.

Since his passing, I've heard from former WBTVers who worked with him, like Denise Dory, Helen Chickering, Cecile Chioco, Theresa Varga, and Michael Marsh. Even in the dog-eat-dog world of TV news, Channel 3's competitors reported the story and offered their own condolences on websites and on the air.

About a year ago, Bob and I had one of our occasional dinners together to catch up on things, and he asked what I thought about him taking a year off to sail. I loved the idea, and told him there was nothing wrong with a sabbatical. "Just be sure to shoot some video," I said.

I'll remember many things about Bob, and I'm thankful, as I told his wife Emily, that she was in his life. She replied, "I've been lucky to have him in our lives."

That goes for the rest of us.

Shannon's media column is published every other week in CL. She's an independent television producer and former news manager at WBTV. E-mail her at Shannon.Reichley@cln.com