Snoopy & co. take it to the house

With CPCC's production of Godspell in its closing weekend while Children's Theatre of Charlotte fired the first volley of their new season, You're a Good Man, Charlie Brown, local theatergoers had their choice between two musicals with notable affinities. Both works incubated in the '60s, both did better in their off-Broadway premieres than in their subsequent Broadway bloats, both have undergone significant makeovers since their earliest incarnations, and both are afflicted with twee episodes that beg a critic's indulgence. 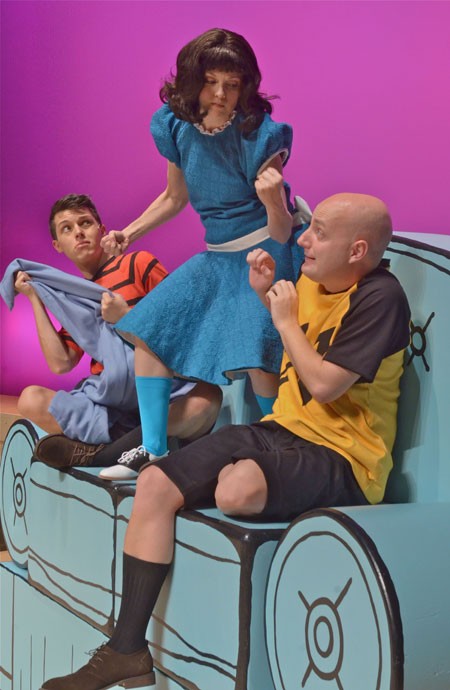 As their histories suggest, the deformities of both works are magnified when you stage them in large houses with elaborate productions. That's why CP was smart to move its season kickoff from its mammoth Halton Theater to the more intimate HQ of yesteryear, panoramic Pease Auditorium, keeping Godspell simple and colorfully bohemian. While Children's Theatre clings to tradition, opening at its bigger ImaginOn venue, the McColl Family Theatre, director Ron Chisholm and his design team have mostly kept production glitz at bay.

Compared with the blockbusters that opened the first four seasons at the 550-seat McColl — Peter Pan, The Wizard of Oz, The Magician's Nephew and The Lion, the Witch, and the Wardrobe — the current musicalization of Charles Schultz's Peanuts comic strip looks conspicuously modest. In fact, the last four openers — Beauty and the Beast, Aladdin, Seussical and Charlie — represent a gradual slimming-down of expectations, budgets, personnel and intellectual protein.

Kudos go to Chisholm and musical director Drina Keen, who have deftly sifted through the 1967 and 1999 scripts and scores in crafting their own 85-minute edition. Basically, they've taken the 1999 book, which substitutes Sally for Patty, but they've also axed the intermission while cutting a couple of scenes from Act 2. So we still get the most familiar motifs from the comic strip: Lucy's psychology stand, Linus's security blanket, Schroeder's fixation on Beethoven, and Snoopy's imperishable Red Baron fantasy. Plus Charlie B's unrequited love for the little redhead and his epic baseball futility.

Thanks to scenic designer John Bowhers' artistry, we breathe the pure serene of Schultz's skies. An unexpected newspaper motif frames the proscenium of this animated world, and both Charlie's school bus and Snoopy's doghouse have a pen-and-ink quality that will delight kids of all ages.

So will the cast when the book and songs aren't too, too juvenile. Ashby Blakely is on the cusp of being too old for the title role, so we're fortunate to have him now, perfectly gauging Charlie Brown's high spirits, puzzlement and grade-school angst. He's liveliest in the Peter Rabbit "Book Report" song, where conductor Keen dons the most outré of Peter Smeal's prop designs, a rather dinky rabbit beanie.

Charlie's perennial nemesis, Lucy, is rendered with more than sufficient pretension and bossiness by newcomer Lucianne Hamilton. Helping draw laughs is Devin Nystrom as Lucy's little brother Linus. Though he actually towers over Hamilton, Nystrom is intimidated enough to make it work, and his height enhances the humor of Linus's legendary inability to discard his signature security blanket.

The entire cast is adult, but the most diminutive of them all may be giving the most perfect performance. In a garish pink polka-dot dress, Cassandra Howley Wood takes a little off her grating squeaky mode as Sally, getting more mileage than anyone else from her smattering of one-liners and absolutely nailing her capricious showcase song, "My New Philosophy." As Schroeder, Kendall Adaire Payne excels as a straight man, whether spoon-feeding Sally those new philosophies or enduring Lucy's overtures to him from behind — and eventually under — the keyboard. But Schroeder's showcase, "Beethoven Day," is just too inane for anybody to shine.

More fortunate is Marc Bastos, who gets far more musical meat to sink his teeth into as Snoopy — and an adorable flop-eared costume from designer Magda Guichard. This is easily the best I've seen from Bastos. Even better than his "Red Baron" is his bravura "Suppertime," where Chisholm lets him (and his dinner bowl) go out into the audience and work the crowd. Parents may occasionally drowse during this lightweight effort, but with shticks like Snoopy's, kiddies will be hanging on every beat.