Gospel Gravy at the Cookery

Plus, a Charlotte worth visiting 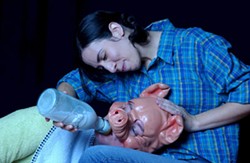 Classically trained Gretha Boston doesn't have nearly enough grits and gumbo in her vocal stylings to be labeled a jazz singer. But there's enough gospel gravy around the edges to make her performance in Cookin' at the Cookery a tasty delight.

Boston faces an enviable dilemma in paying tribute to Alberta Hunter, the songstress who traded licks with Louis Armstrong in the 1920s and made a historic comeback in the late 1970s -- at the age of 82. Her mezzo-soprano voice is sweeter and more robust than Hunter's ever was. To simulate the timbre of the octogenarian who took Manhattan by storm, Boston would actually need to distress her vocal cords to the point where they grated like sandpaper.

For the most part, we can be thankful that Boston leaves her voice -- and her style -- well enough alone. The Arkansas native won a Tony Award in 1995 for her portrayal of Queenie in the Broadway revival of Show Boat (a role that Hunter originated in London in 1928), so she has plenty of zest of her own to lavish on "St. Louis Blues" and "My Castle's Rockin'." There's a plaintive, velvety quality in her final rendition of "The Love I Have for You" that evokes Abbey Lincoln.

It can't get much better than that.

Handling the narrative chores in Marion J. Caffey's script, Boston reaffirms that her acting chops are nearly as formidable as her singing. Boston's personal charm serves her best in the raunchier gleanings from Hunter's repertoire.

Prime example: For the notorious "My Handy Man," Boston chooses a strapping male dedicatee from the audience and proceeds to boast about how he greases her griddle and creams her wheat -- plus sundry other services.

I wish I were as satisfied with the performance of Janice Lorraine, the Younger Alberta in this bio-musical's plentiful flashbacks. Obviously prodigiously gifted as a mimic and comedienne, Lorraine plays about a dozen characters, ranging from Oscar Hammerstein to Louis Armstrong to Hunter's nursing supervisor.

But she doesn't always rein in her outsized gifts with artistry and taste. Chris Albertson, who brought Hunter out of seclusion and into the recording studio, and Barney Josephson, who engineered her Cookery comeback, are reduced to doddering buffoons. Lorraine's overreaching caricature even extends to the Younger Alberta.

Still, the most unforgettable moment of Cookin' at the Cookery is when Lorraine transforms herself into Louis Armstrong for a show-stopping "When the Saints Go Marchin' In" duet with Boston. Lorraine's meticulous physical detailing and her spot-on replication of Armstrong's garbling rasp are an unmistakably loving tribute.

And simply amazing. Nine long months after their Forever Plaid brought joy to McGlohon Theatre, the PAC has co-produced another winner, this time with Crossroads Theatre Company (NJ) and Queens Theatre in the Park (NY).

Children's Theatre of Charlotte continues its winning skein at McColl Family Theatre, filling the house to capacity and weaving gilded strands of comedy, wisdom and pathos into their newest production of Charlotte's Web. But only after a lurching, suspend-your-disbelief-dammit beginning.

That's because director Mark Sutton has audaciously cast Carver Johns as Wilbur, the foredoomed pig who wins the fickle favor of Fern Arable and the deathless devotion of a belletristic spider. Johns is a mountain of a man, most of his 250 pounds honest sinew and muscle. Getting your arms around the idea that Johns is the runt of the litter is even more difficult than getting your arms around Johns.

Once we're past that imaginative leap, it's smooth sailing for a fine, confident cast piloting one of the very best children's stories ever written. You feel the void when Fern must leave her pampered, beloved Wilbur at her Uncle Homer's farm. Yet there's immense consolation in the bond that develops between Charlotte and Wilbur -- and hearty comedy from the barnyard critters, including Jill Bloede's lisping Gander, Matt Cosper's bespectacled old Sheep and Robert Haulbrook's devoutly selfish Templeton the Rat.

With a lordly 81-minute running time, Charlotte's death and legacy get equal weight alongside her PR exploits. Indeed, we get the full bloom of Wilbur's development, Fern's maturation and Charlotte's sacrifice. Nicia Carla takes the spotlight early as Fern, affirming Wilbur's runt-to-life cause, then deftly recedes as the pig-spider friendship plays out.

With her sparkly skin-tight costume and her high-gloss wig, April Jones looks like she might break out a chorus of "Baby Love" before getting serious as Charlotte Cavatica. There's a pearlescent softness in her voice and those multiple legs she's saddled with severely restrict her movement. Yet the intimacy she shares with Johns has such depth to it that the springtime rebirth that follows feels anticlimactic.

Why, when we reach the County Fair, the design team even contrives to make this Wilbur look like a runt next to the stupendous porker destined for the blue ribbon. Johns doesn't even have to hold his stomach in.

I made the mistake of taking my eyes off the great Charles Dutoit as he conducted the magnificent Royal Philharmonic Orchestra last week at Belk Theater. So an abrupt shift in dynamics during the opening movement of Tchaikovsky's Symphony #6 (Pathétique) nearly punched my heart out.

The appetizer in this Carolinas Concert Association event, Jean Sibelius' Karelia Suite, certainly created good will among subscribers with its powerful thrust and gorgeous colors. Trumpets shimmered and trombones thundered in the climactic "Alla Marcia," a march that never sounded more British.

As sharp as Dutoit's detailing was, the Londoners' execution kept pace, particularly when pared down for Mozart's "Turkish" Violin Concerto #5. Alas, soloist Joan Kwuon wasn't always in the same class as her Rolls Royce accompaniment.

After seeing Carmen there last Saturday, I'm tempted to proclaim Halton Theater the best opera venue in town. Certainly CPCC Opera Theatre has stepped up to the challenge of this new capacious hall -- with grander scenery, finer costuming and a pit-full of grand orchestral sound for this colorful Bizet spectacular.

Most surprising were the voices. Mercedes Wood was a sinuous, sensual exponent of the capricious cigarette temptress. Todd Geer was even better, giving a hot-headed read to Don Jose with silken vocal lines and heartfelt passion. As Micaela, Monica Denise Murphy scaled nearly all the high notes sweetly importuning her beloved Jose. With Sarah Nifong as Frasquita, there was even a genuine find among the comprimario singers.